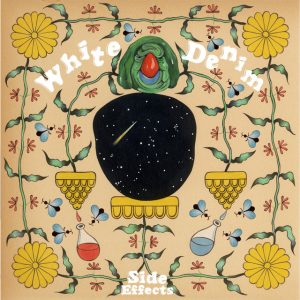 It’s been less than a year since the last White Denim record, and only a month or so since their last EP – they’re the type of band that always seem to be creating something, promoting it, touring or doing stuff. Restlessness can be lethal to the modern band, especially if they lack the ideas to keep the ship afloat.

The problem with Side Effects, especially coming only a short time after the rather great Performance, is that while some songs feel like they have too many ideas going on, others feel like they have none. Of the nine tracks here, the majority will be played once or twice to the (sell-out) crowds they’re performing to around the world this summer, with maybe one or two lasting for more than a single tour cycle. Maybe that’s why White Denim seem to be in such a rush to put material out all the time – they do things the old fashioned way and need an album to tour behind.

The tracks are largely a mixed bag, and the entire collection feels a little too rough – as though they could have spent another week on it (or at least spent another couple of months writing some more tunes). It seems daft to complain that a band are maintaining a speedy album-dropping schedule, but perhaps it’s necessary when the drop in quality is this apparent.

White Denim leaders James Petralli and Steve Terebecki brought in their touring band to maintain that classic ‘live-show’ feel they’ve been cultivating for the last couple of albums. Opening with Small Talk (Feeling Control), Side Effects bursts out of the traps. There are shifts in tempo, a variety of textures and some weird experimental noodling. So far, so White Denim. Hallelujah Strike Gold follows, and maintains the schizoid atmosphere, pushing through into jazzy, acid-rock jam territory. It’s odd, and distinctive, and lovely.

Shanalana uses bone-dry flavours to sinister effect – it sounds like it should be soundtracking a car chase through San Francisco in the near future. Or distant past. It’s the kind of thing Josh Homme the foundations of Queens of the Stone Age on: A little T Rex, a little Cramps, a little Hawkwind.

NY Money is the longest track on the set, it veers close to krautrock in both rhythmic and sonic territories. The motorik beat, the beeping, chrome-plated guitar riffing… it’s the highlight of the set by some margin. The Thin Lizzy strut of Reversed Mirror brings their sound the closest it’s ever been to modern psych-warriors like The Sword. There have been times where they’ve flirted with a heavy metal sound, and this is one of those moments.

This is an absolute delight for a fan, but hard to recommend for anyone else. Of the entire back catalogue, Side Effects seems like the slightest of their albums, but at least its hottest moments go some way to countering how underdone the whole thing seems.