White Hills – So You Are… So You’ll Be 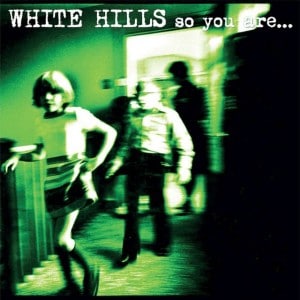 Describing their own sound as “fuzzed out motorik spacerock”, New York based White Hills have released some 10 albums since their 2005 debut They’ve Got Blood Like We’ve Got Blood. The prolific output ranges from heavy thrash to blips and bleeps with a healthy dollop of psychedelic metal, all built around the vision of core members guitarist Dave W and bassist Ego Sensation.

The eponymous album of 2010 enjoyed considerable critical acclaim, with general comparisons to Hawkwind being common; the other worldly, spacey musical landscapes that White Hills create can be compelling and absorbing at times and their reputation has now seen them earn a support slot to the legendary UK goth rock gods The Cult on their current US tour.

With such a continuous output it is inevitable that the quality – as well as style – can occasionally vary and that is apparent even from the opening few moments of So You Are… So You’ll Be. The aforementioned blips introduce the album, with garbled radio transmission noise and further bleeps leading into first track proper, In Your Room. The track gives a good indication of what to expect for the majority of the album: built around an opening two minutes of incessant, repetitive fuzz-heavy guitar riffing, proceedings then take a detour into more subdued but still eerily repetitive ground with echoing distorted vocals reverberating around the noise. Ever the chameleon, In Your Room then hits stellar heights with its finale, another bonecrushing riff thundering its way into the picture.

The Internal Monologue is as spacerock as you can get: atmospheric, continuously shimmering cymbals create the sensation of actually floating in space, with intermittent synthesiser effects increasing the feeling. After five and a half minutes of this space noise, the title track bursts into earshot with another heavy and repetitive guitar riff being coupled with more of those echoey, distorted vocals; lyrics are generally indecipherable, the vocal sound probably more vital than the lyrical content itself. Insistent drumming drives the track along, with ever present bass poundings and what almost passes as lead guitar soloing offering accompaniment. The track then succumbs to spacey musical meanderings during a lengthy outro.

More bleeps and garbled noise appear before Forever In Space (Enlightened) enters the fray; conjuring up images of a space-dwelling android monster (if such a thing exists), the track blitzes along to another mind-bending guitar riff, sounding like a futuristic Can in the process. The repetitiveness and robotic, swirly synth sounds seem more essential than before and with warp drive employed during a phenomenal, fuzz-drenched ground-shaking guitar solo the track is a clear highlight.

At times White Hills produce moments of stunning spacerock splendour within this latest offering; the psychedelic riff-heavy drone married with swirling space noise can be captivating. When the band take a decent melody and build a whole track around it, the formula is a winning one; what won’t appeal to some though are the occasional meanderings where the spacey blips and bleeps appear to have no meaningful musical direction. If White Hills concentrate on collating only the very best of what they are producing rather than working in a non-stop conveyor-belt fashion, they might just produce one of the greatest albums of all time.