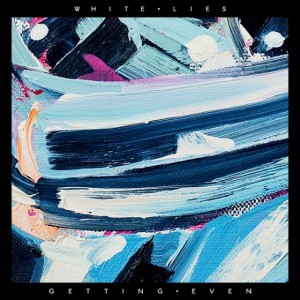 Once a band get tarred with a certain brush, it is often very difficult to escape the comparisons that constantly follow them around throughout their career. It is something London trio White Lies had to get used to quickly. Like Editors and Interpol before them, White Lies’ dark, melodramatic rock was often unfavorably compared with Joy Division when they first broke on to the scene with their debut album To Lose A Life in 2009.

Despite the attempted slight of the comparison – as apparently Joy Division have monopolised the whole brooding rock thing – White Lies’ debut went to Number 1 in the UK albums chart. It was by no means perfect, but To Lose A Life was full of massive rock songs that could easily fill any arena. The band’s ambition only grew on the follow-up, Ritual, which was clear in the album’s monstrous lead single Bigger Than Us.

Yet, although the sheer scale of Ritual was certainly impressive, it sounded rather hollow compared to its predecessor and, unsurprisingly, critics were not exactly forthcoming with their praise. However, for whatever faults White Lies may possess, there is no doubting their ability to write huge choruses. And this comes to the fore once again on their third studio album, Big TV, which sees them return to their anthemic best.

The album kicks off with the throbbing synths and sprawling riff of the slow-burning title track, as lead singer Harry McVeigh bemoans: “I can’t work for free, I’ve got a room downtown with a bed and a big TV.” It is the first of several songs dealing with the shallow desire for modern success, as the album tells the story of a girl who moves to a big city in search of just that. Not only is it an interesting theme, but it is one that suits White Lies foreboding sound.

Following on from the expansive opener is the first official single from the record, There Goes Our Love Again, which is much more direct and commanding, displaying the sort of infectious chorus that made the band’s debut so popular. Mother Tongue is another track that revolves around a concise – if slightly forgettable verse – before going up a gear on the sun-drenched chorus, which is an obvious nod towards the ’80s.

Talking of the ’80s, Getting Even is also indebted to the decade and Tears For Fears, in particular, bursting into another mountainous chorus, as McVeigh sings: “Listen to some reason, there’s nothing in your dreams.” The song continues the album’s central narrative, something that was noticeably missing on Ritual. Elsewhere, First Time Caller is surely destined to be a single, with a cheesy, but catchy chorus, while the soaring Be Your Man is virtually White Lies by numbers.

In fact, White Lies very rarely deviate from the formula that has already brought them such a dedicated fanbase during Big TV, which is by no means a bad thing. The band know exactly what their fans want and they give it to them in spades – just as Mumford And Sons appease their loyal followers. This is only confirmed by Tricky To Love and Heaven Can Wait, two songs that the band probably could write in their sleep.

While Big TV is unlikely to win over those who have already dismissed White Lies as revivalists, it is an album that is going to score highly with fans. It may not have the instant appeal of To Lose A Life, but the combination of the running narrative and a host of memorable hooks make it their most consistent record to date. With a main stage slot at Reading and Leeds Festival just around the corner, it appears White Lies are definitely here to stay.