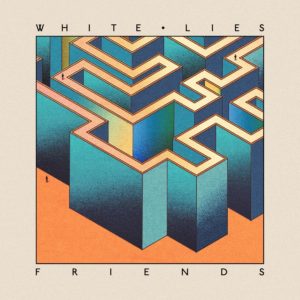 It is often all too easy for bands to be pigeonholed. First impressions count in the music industry and White Lies are a perfect example of a band who have struggled to shake off the ‘moody rockers’ label they were given following the success of their debut LP, 2009‘s To Lose My Life. The record’s central theme of mortality, plus the trio’s gloomy demeanor, meant that they were lazily dismissed as Joy Division wannabes by some.

This early perception of the band carried over onto their second effort, Ritual, which received a bit of a kicking from several reviewers for being a downer despite being a solid second album overall. However, rather than being deterred, White Lies came back even stronger with third record, Big TV – a sort of concept album that defiantly refused to compromise on the atmospheric stadium rock sound of their earlier material.

Having essentially stuck a big middle finger up to their critics, White Lies found themselves in an interesting position as they started work on the follow up to Big TV. They were left without a label due to the reorganisation of their previous record company, but rather than re-sign straight away, White Lies made the most of the freedom to begin the creative process for fourth album, Friends, without the usual pressures.

In fact, thanks to the extra time the band were afforded by not having label bosses to answer to, White Lies were able to experiment. Now that’s not to say that Friends is unrecognisable, but there is a freshness to it in places. Opener Take It Out On Me employs the sort of synth rock they are known for, yet it builds to an irresistible feel-good chorus (“I’m in love with the feeling/ oh take it out on me/ maybe hooked on the healing”).

Lyrically, there is still a dark twist, but it is hard to ignore the upbeat tempo. The same is true of Hold Back Your Love, which features another big, sing-a-long chorus over shuddering synths that appear to have been transported from the ‘80s. Then there’s the glossy melody that forms Don’t Want To Feel It All, as McVeigh’s booming vocal gets a proper workout on a chorus that is much more typical of White Lies’ melodrama.

“I’m not gonna break your heart or even bruise it,” the frontman intones, capturing the central theme of the record. As the title clearly suggests, Friends is about the changing nature of relationships and the move into adulthood. It is a message that suits White Lies’ rather serious tone, with tracks like Is My Love Enough? and Summer Didn’t Change A Thing demonstrating how the band’s sound gives weight to their lyrical themes.

That said, the combination doesn’t feel as seamless as it did on Big TV and there are several moments where it all falls a bit flat. The record definitely struggles to reach the same heights as Take It Out Me in the anthem stakes, with Come On showing White Lies at their plodding worst. Morning In LA provides a suitable companion to the opener due to its shimmering synths, but like Right Place, it is rather formulaic.

Yet there is still plenty to like about Friends, with Swing a particular highlight. It is a reminder of just how affecting White Lies can be when they get the balance right, relying largely on McVeigh’s foreboding vocals. Unfortunately, overall the record is unable to match the consistency of its predecessor. That the trio started work on Friends without a label is certainly telling, as the overriding impression is one of a band in transition.