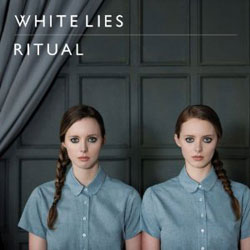 In the expansive lexicon of music criticism, we somehow don’t have a word to describe the dilemma of a band like White Lies. They’re big, loud, and noble to a point – borrowing hooks from some of the biggest bands in the world; Arcade Fire, Kaiser Chiefs, a dash of the wayward Interpol – but none of the heart and swagger that make those bands great. They try to trick us into thinking aspiration runs in their blood by copying down the shivering ostentation devised by more popular bands with more memorable songs – resulting in albums that sound massive, yet entirely hollow.

That’s a roundabout way to say it, but that’s where Ritual lays, a sophomore effort that will break no promises nor fools any expectations. Like the moderately successful rock band they are, White Lies will stick to what built their aggressively mid-level career so far. It’s an aggravatingly mediocre listen, unapologetic in banal self-seriousness, and approaches its emptied, prewritten songs with a bizarre sense of territoriality. You get the sense that these guys actually think this sound belongs to them, wrought by hand and creative integrity, over studio hours and instrument proficiency. Ritual introduces itself with such misguided fortitude you might, even for a second, mistake it as something phenomenal.

Which of course it isn’t. In fact White Lies appear more like Editors than anything else, another flavourless band much too late to the rapidly-decaying UK-indie party. Ritual adds a few more synthesizer brushes to the mix, keeps the orchestra, the general moroseness, the absolutely abysmal lyrics. A few of the tracks have a moment, usually a chorus, that you might want to play back a few times. But like Editors, taken as an album there’s nothing unique, rewarding, or even merely engaging enough to be worthy of another spin.

But still, there are those few moments. The icy synth lasers on Holy Ghost, the absolutely evil final-boss intro to Turn The Bells, opener Is Love’s acid house warble. But the record is chained to a sulky atmosphere that’s never given direction, weight or depth beyond Harry McVeigh’s childish, faux-philosophical, and almost condescending lyrical runs. And even at their dance-rock heights, White Lies never hit euphoria. Plenty of stadium-rock anthemers have long exceeded Ritual’s feeble steps forward. There are plenty of negative things to say about The Killers, but at least they occasionally ratchet a crescendo into unparalleled bombast, and they managed to be bright and wide-eyed while doing it. When McVeigh sterilely mutters “your head on my heart anchored the storm in my eyes /I lay like a carcass your lips never letting the blood dry” better bands are singing better songs without pretense or plan. “If you still want me /please forgive me” or “I know you’ve supported me a long time /somehow I’m not impressed” or “you sit there in your heartache /waiting on some beautiful boy to save you” or hell, “see the stone set in your eye /see the thorn twist in your side”… Why waste your time on White Lies’ soggy romance when the world offers so much more?