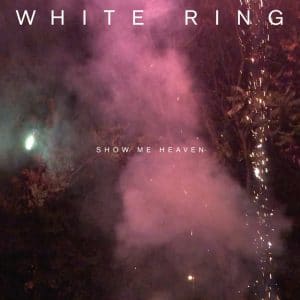 Somehow, this is only the second album from White Ring. To say they do things at their own pace is something of an understatement, this is, after all a band that formed on MySpace, when MySpace was actually still a thing (apparently it still is a thing, who knew?).

At the heart of the Witch House sound, White Ring created a noise that seemed to poke at a range of human emotions with a stick in a barely interested way. That’s not to say that the music White Ring created possessed no emotion at all, far from it. Their albums were dark, grimy and scary and every so often, they’d create something that was utterly blissful. But the after-hours, smoky, dangerous, electro-vibe they worked with gave them a sense of disconnection. Coupled with the imagery in their videos for Nothing and King it’s fair to say that not only did White Ring exist in the “zero fucks given” zone but they were also quite adept at hosting house parties in the arena of the unwell.

Show Me Heaven finds White Ring in completely different territory however. In part, it seems likely that this change in tone and outlook is down to the tragic passing at just 37 of founding member Kendra Malia. Show Me Heaven was already underway at the time of Kendra’s death, with Bryan Kurkimilis flexing his electronic muscles and creating a backdrop for Malia and new addition Adina Viarengo to inhabit. This is not an album that has been honed to provide the tunes for a dodgy vampiric club. Nor does is seek to immerse its audience in a cloak of grime. This time around there’s a vague air of positivity at play, which, given the circumstances surrounding its genesis, is surprising.

There are, of course, moments where the White Ring of old makes an appearance. For example, I Need A Way grinds away in a pleasing grunge riff meets electro-chaos kind of way that wouldn’t be out of place on a mid ’90s Ministry album. Drop possesses a chilled and somewhat sinister feel as it creeps from the speakers. It’s stripped back and allows a lot of space, which curiously makes it feel even more claustrophobic than White Ring’s more dense songs.

There are moments of genuinely blissed out contemplation, something that has been fairly absent on the band’s previous work. Calm Down, drifts along with a glacial nonchalance, or at least it seems to. Dig a little deeper and there’s a contemplative mood at play, there’s still a hint of menace in the bottom end, but this is a rare excursion into almost romantic territory. Similarly, Fake Fuck, a song whose title suggests something far more aggressive, finds White Ring stepping away from the wide eyed abandon of illicit late night clubs, and instead embracing the somnambulant joy of hazy shoegaze guitars and blurred lines.

Keeping things blurry is the White Ring way, and much of Show Me Heaven is steeped in washes and filters. Vocals are rendered all but inaudible as Kurkimilis weaves his peculiar dark arts magic. What isn’t in doubt, however fuzzy things get, is that there is a lot of love here, twisting in the ethereal majesty of White Ring’s innovative and ground breaking sound. As a statement of love, grief and celebration, Show Me Heaven fulfils its purpose beautifully. This is a perfect hazy tribute to Malia with White Ring moving delicately from the harshness found at gates of grief towards a kind of inner peace at the gates of heaven.