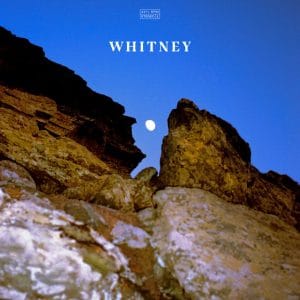 Candid originally began as a way for Whitney‘s Julien Ehrlich and Max Kakacek to blow off some steam in the studio, following the release of last year’s Forever Turned Around. After knocking out a couple of cover versions, they kept discovering more songs, and eventually, a 10 track covers album was born.

Covers albums are always tricky to pull off. There’s the risk of self-indulgence, and the fact that it’s usually pretty impossible to improve on an original. Weezer discovered this on 2018’s Teal Album, where photocopy versions of songs by ELO, Toto and a-ha among others were phoned in. Thankfully, Whitney have taken a rather different approach.

For a start, most of their choices for Candid have been pretty deep cuts. In fact, arguably the only song on the album likely to be recognised by the casual music fan is John Denver‘s Take Me Home Country Roads. Instead, there are obscure songs by The Roches, Moondog and Labi Siffre – and even better, they’ve stripped the songs down to the basics, and turned them into, well, Whitney songs. If you didn’t know better, you’d swear this was a brand new release from the duo.

The RnB songwriter Kelela may not seem the most likely Whitney inspiration, but her song Bank Head kicks off the record. The beats and synths are replaced by piano and acoustic guitar, while Ehrlich’s falsetto anchors the song in a warm and comfortable hue. As with a lot of Whitney’s material, you can imagine it being the perfect soundtrack for a lazy day relaxing in the late summer.

Strange Overtones, originally a track on Brian Eno and David Byrne‘s Everything That Happens Will Happen Today album, is recreated pretty faithfully and with much success, while the best song on the album, Hammond Song by The Roches, takes the original harmonies away while retaining its bittersweet, poignant air.

Moondog’s High On A Rocky Ledge is the only song that doesn’t work particularly well – its wilful eccentricities only serve to grate in Whitney’s hands, while that version of Take Me Home Country Roads (featuring Katie Crutchfield from Waxahatchee) is a nice if inessential detour into alt-country karaoke.

Happily though, the overall quality of Candid is surprisingly high – for a covers record. Rain sees the lush RnB stylings of SWV‘s original replaced by a louche ’70s style feel and somehow ends up feeling more like a Whitney song than an SWV song. And while there’s not much to distinguish Whitney’s version of AM AM from Damien Jurado‘s original, it fits in nicely onto Candid like most of the other songs gathered on it.

This is a pleasant diversion for Whitney fans waiting for a follow-up to Forever Turned Around, and if it has the side-effect of directing people to the hitherto undiscovered treats of the likes of The Roches, Jurado and Moondog, then so much the better.