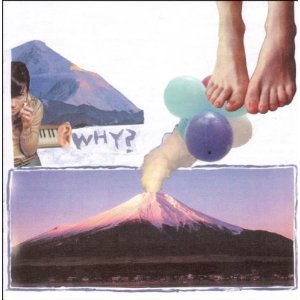 Jonathan ‘Yoni’ Wolf is the anti Kate Bush. Not only musically but in terms of output. As a member of Clouddead, Hymie’s Basement and through his work in Why? the man’s scattergun muse contains so many ideas that he seems to produce LP’s quicker than most bands spend recording a drum track. He does share one thing in common with Kate Bush, both Elephants Eyelash and Ariel were recorded at home. Mind you, I’m sure Kate’s studio is a state of the art complex and Wolf’s is a misfiring PC and a parade of dime store instruments.

The journey that Wolf has taken is rare in modern music. While most ‘indie’ bands attempt to steal a little street cred by co-opting hip-hop into their sound, yes that’s you Mr Albarn, Wolf has gradually shifted from left field hip-hop into an increasingly more ‘indie’ sound. At times Elephant Eyelash is so far removed for any notion of hip-hop that it could be the new Strokes record. That’s unfair though, as actually there is far too much imagination displayed here for it to be as one dimensional and prosaic as The Strokes.

When I say that this record sounds ‘indie’ I mean it in terms of the American 90s underground. We are talking Pavement, Beck and Sebadoh. The melodies are hidden, blurred, the fractured song structures and slanted instrumentation refract and submerge the tracks in a sticky molasses of sonic pesticide. Yo Yo Bye Bye showcases Wolf’s have rapped half sung vocals perfectly. Built around dubby elastic drums, a see saw fuzzy riff and a sparsely employed piano, his flow is part backwoods MC and part emo indie frontman. Rubber Traits is a whirl of space invader synth bleeps, a gentle electronic baseline and brittle guitars.

The songs are densely packed lyrical knots. Words wrap themselves around shards of melody. Little twists in the backing tracks cast light and shade, dust and moonshine on the non-sequiturs and back flipping rhyme schemes. The American gothic of The Arcade Fire is audible in the desolate slow burn of The Hoofs. Act Five’s barbwire guitar and machine gun drum patterns are glued together by a high pitched whine – it sounds likes a radio calling out from the bottom of a well. The lyrics deal with death and the afterlife. The closing Light Leaves weaves a gentle spell across the coffin rhythm, the whispered vocals that float through the end of the track sounding ghostly and haunted like messages from beyond the grave. Its allusions to suicide, the morgue slab and caskets are Six Feet Under in audio form.

The whole LP pulls off the neat trick of inserting cutting lyrics inside sweet sounding shells. On casual listen, Sand Dollars could be another indie Beach Boys homage: the harmony drenched chorus uncut but the lyric “These are selfish times, I’ve got selfish dimes, and sand dollars.”, proving it’s not Surfin’ USA.

Elephant Eyelash is so complex, fluid and tangled that on every listen it seems to mutate into another record. It will take months to pick apart at the seams. It’s cluttered up with meaning and bursting with detail. Part folk, part indie, part electronica and thought provokingly weird, draw up a chair and prepare to disappear inside its hidden depths.