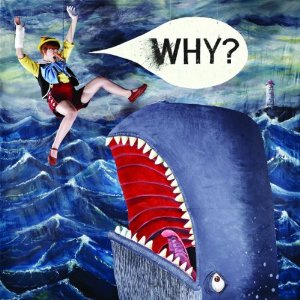 Jay-Z was arguably at his best on the Black Album, contemplating retirement and mortality, putting his career in relief. Yoni Wolf is no Jay-Z. He’s an indie rap/rock oddity rather than any kind of megastar but Why?’s fourth album, Mumps, etc., finds him in the same mindset. Across the tracks he wonders whether he can keep trudging around in rental cars and on economy flights, dreams of a time when he might sit in a rocking chair and listen to Garrison Keeler and picks at thoughts of mortality like a barely-healed scab.

Morbid thoughts are hardly new ground for Why?. The band’s extraordinary second album Alopecia was home to unsettling tales of sex and death in Berlin (The Hollows) and the declaration “I sleep on my back ‘cos it’s good for the spine and coffin rehearsal…” (Fatalist Palmistry). By 2009’s Eskimo Snow, we were told “a man should die gaunt and not bloated and overdone” and heard Wolf asking to be left laid down in a hearse. Stitches and gin have always won out over bitches and bling in Why? world.

While mainstream hip hop autobiography usually paints the artist as larger than life, striding out of their painful past to a rich future, Wolf is tied to his path and his weaknesses. Even his most minor boasts are undercut with self-doubt and anxiety. Take Waterlines where he unspools possibly the only rhyme in history featuring a hair loss treatment: “Girls used to fawn over my locks to kill/now the curls are gone/and I’m on Monoxodil/I’m in decline but women be jocking still…”

The song goes on to paint a pretty mundane and miserable picture of life as a minor indie star “on stage fronting/for fame wanting” with Wolf quietly complaining: “I can’t sleep in rental cars or airlines so I keep a deck of cards for downtime.” Behind him a harp, bells and a basic piano line provide the beats, a stark backing. “I’d prefer to be some unknown with a sports car than pen the dumb pun poems as a poor star”. Put the Waterlines together with the tunes that precede it, Jonathan’s Hope and Strawberries, and you get what could be called the “be careful what you wish for” trilogy.

Opening with gentle piano and sweet harmonised humming, Jonathan’s Hope starts the album on a false note of hope. That feeling is cut off quickly as Wolf drops an awkwardly frank line: “When I got better from the mumps/yes, my swollen nut and neck shrunk/but/though subtle I can smell distinctly/some sick and swollen stink still to this day stays with me”. On the shuffling, Strawberries, the past is also sticking around spoiling things. Wolf is haunted by “the shit he said” to everyone from “hotel managers” to “high school counsellors”. The hook sums up the album’s theme and perhaps the thrust of everything Why? has ever made: “I am not ok, boys”.

Pseudo-Fleet Foxes folk is shattered at the start of Sod In The Seed, as Wolf busts in to “review some facts”. The acoustic-guitar driven track is the album’s most striking, an almost embarrassingly accounting of Why?’s status: “I make decent cash/I’m a minor star/and we can’t last if she don’t drive a hybrid car/I scribble vapid raps/on your flyer backs…” Thankfully there are some jokes in there – “pull up to Critical Mass in a gas-guzzling Ford/just to ask you when next your rock outfit performs/before you tell me the facts/I’m down the road yelling back/please post it on the Whole Foods bulletin board…”

The cello slumping its way through Distance is the most appropriate backing for Wolf’s schlubby self-sabotaging but there’s deft production all over Mumps Etc – the stuttering opening and almost operatic backing vocals on Thirst, the brass seventies keyboard that herald Kevin’s Cancer and the perfect pairing of glockenspiel and whistling on Jonathan’s Hope.

For all the hints, hat tips and heart ache splashed around on Mumps, etc., this is probably not going to be the last we hear from Why? Just as Jay-Z couldn’t keep away, Wolf has far too much to say. And like Mr Carter leaving himself an opening (“When I come back like Jordan…), Wolf ends the record on a note that suggests his obsession with the end isn’t played out yet: “I’ll hold my own death as a card in the deck to be played when there’s no cards left.” As A Card with strings high in the mix again is an oddly optimistic way for an often sickly and sad record to end. Listen carefully and you’ll suspect Wolf likes it that way.

There’s nothing on Mumps, etc. that can match the dark drama of Alopecia, still the best of Why?’s albums, but if it was Wolf’s final statement, it would still be a worthy one. There’s enough humour in the words and inventiveness in the production to keep coming back to these songs, though you can only hope Wolf will sound a little less broken the next time around.