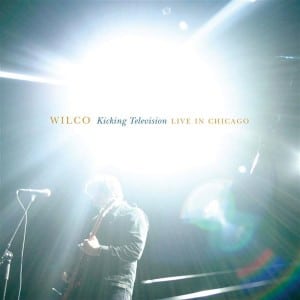 Anyone lucky enough to have caught Wilco on their UK tour earlier this year would have seen a special band at the peak of their powers. These guys have evolved out of their alt-country beginnings to become creators of sonic, textured music leading to a tiresome, though justified, assertion that they are the ‘American Radiohead‘.

Back then they were touring their latest album A Ghost Is Born, and this double CD is taken from the same tour when they reached the band’s hometown of Chicago. The extraordinary Wilco live experience is fully conveyed here; with Jeff Tweedy and co on ruthless form taking us through material from their most recent albums, along with re-visits to tracks from Being There and Summerteeth.

If you, like me, have spent time musing about how well The Beatles would have fared translating to the stage their visionary output from 1966 onwards, you would do well to listen to this, as this is what it might have sounded like.

Wilco’s last two albums have been collages of electronic wizardry and, frankly, sometimes, extremely unpleasant distorted noise (A Ghost Is Born contains 15 minutes of white noise). It may seem natural that this could not be reproduced on stage with the same intensity as the record.

Not so. They find ways to plug the holes and generally magnify the severity of their acute, angular yet extremely moving songs. Of the early material, Shot in the Arm stands out as does the gloriously aggressive Misunderstood while Yankee Hotel Foxtrot’s I’m The Man Who Loves You lives up to its status of guaranteed crowd pleaser. Hummingbird, from A Ghost Is Born, in this live setting confirms itself as a spiritual outtake from The White Album.

Without doubt though, the greatest moment must be when the boys perform the centrepiece of A Ghost Is Born, Spiders (Kidsmoke). This lengthy opus has a relentless driving instrumental mantra that seems to go on forever, before Tweedy and brilliant lead guitarist Nels Cline invade the song with a crushing onslaught of heavy guitar.

The idea that Wilco are essentially a group to accompany Jeff Tweedy is one that is often hard to refute. However, Wilco have proved in recent times that while Tweedy may dominate the writing, the Wilco sound is so distinctive that they have become one of those bands that couldn’t possibly function without the irreplaceable contribution of one of the six members. This album testifies that finally after all these years and line-up changes, Wilco have truly have become a band.

It is tempting to describe Kicking Television as flawless. But that almost never happens with live albums, so lets nitpick.

There are too many songs. It may have been more sensible to select fifteen or so standout tracks from their four-day residency at the Vic Theatre in Chicago, rather than the 23 there are. Fewer tracks would have invested more brevity in the most awesome sections of the Wilco live show. Also, we are missing Theologians, an uncompromisingly stonking track from A Ghost Is Born that has evolved into a favourite live staple.

But hell, all is forgiven because they’re just so damn fine. Wilco are currently in a purple patch that will sadly not last forever. I am thankful for what they have given to music in 2005. They are a necessity.