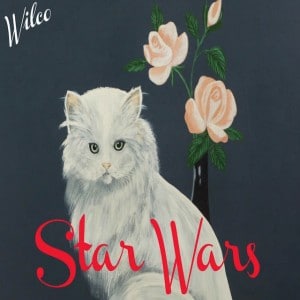 If Wilco have perhaps become a bit taken for granted in the decade following their turbulent and brilliant masterpiece A Ghost Is Born, it’s worth taking stock a little. Star Wars, released as a surprise free download through the band’s website last month and now being granted a full physical release, is the band’s ninth studio album (notwithstanding considerable line-up changes during that time), a sign of both their longevity and continued potency.

If the least interesting moments on the band’s previous album (2011’s The Whole Love) felt light and summery to the point of fading into the background, Star Wars has both a spontaneity and a tautness that announce it as the band’s most exciting album in some time. At just 34 minutes, it is ruthlessly concise. With Star Wars emerging with barely a pause for breath following the conclusion of frontman Jeff Tweedy’s campaign for his duo project with his son Spencer, it is tempting to see it as, if certainly not a throwaway release, then one that feels more carefree (there’s the not-too-original title and unappealing artwork for a start) and energised.

For much of Star Wars, this feels like Wilco at their most integrated, crisp and inspired, although they achieve this in typically unusual ways. Radical guitarist Nels Cline is once again permitted to be mischievous (perhaps even purposefully tasteless at times) and some of the unpredictable, off kilter quality of Glenn Kotche’s drumming has come to once again upset the mood and feel of Tweedy’s songs. It’s also Wilco at their least smooth, this time once again channelling Tweedy’s love of ’70s radio rock through less conventional arrangements.

The opening triple punch is particularly inspired. There’s the short but very sweet instrumental EKG, which features Cline at his most maniacal, snarly and unhinged, which leads swiftly into More…, which finds one of Tweedy’s most infectious central melodies in danger of being brilliantly upstaged by the sparring provocations of the band. Random Name Generator might be even better, with Tweedy taking the title’s memorable phrase and crafting it in to an even more memorable insistent hook. The song is driven by an irresistible, engaging thump and its harmonised fuzz lead guitar lines somehow manage to sound both like a glorious throwback and a way forward. Ostensibly, it’s a residual element from the lightly duelling guitars of Impossible Germany (from Sky Blue Sky), but here it seems to crackle and fizz with new life.

Even on the album’s more conventional moments, such as Pickled Ginger, Cline still manages to create a deft and imaginative running commentary. Where Do I Begin starts out as one of Tweedy’s sensitive ballads (albeit one delivered with a slightly half hearted shrug), before bursting into glorious and wholly unexpected technicolour. The elements of surprise and turbulence returning to the band’s music is one of the most welcome developments on Star Wars.

Yet the album’s centrepiece is a steadfast, repetitive mantra that gradually swells in the manner of a circling, inescapable storm. You Satellite is the only track on the album to exceed four minutes, and it is powerfully mesmerising. Listen carefully and it’s possible to appreciate many fascinating nuances, from the subtle shifts in guitar sounds to the conversational patter between Glenn Kotche’s ride cymbal and snare.

Even when the pace becomes more middling and unified towards the end of the album, there’s still a sense of a band taking risks and exploring sound. Weirdly, the only thing that risks sapping some of the questing spirit out of this hugely enjoyable album is Tweedy himself, as his delivery assumes a more flat, Lou Reed-ish, mumbling style.