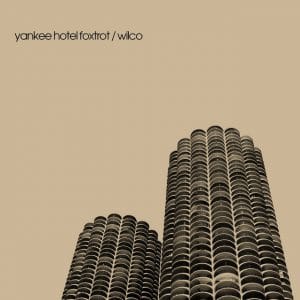 The road to release was thick with brambles and pitfalls for Wilco‘s fourth album, Yankee Hotel Foxtrot. The band’s label, Reprise, condemned the record as a “career ender,” forcing the band to re-sign and reconsider their options. But not to be cornered, Jeff Tweedy and company streamed the album over the Internet months before its release, simultaneously generating a mythical amount of buzz and helping to redefine what it means to own music and how major labels fit into the post-modern musical landscape.

That’s the back-story. And all of it certainly adds what makes Yankee Hotel Foxtrot an important album, but the music speaks for itself. Wilco have transcended the alt-country genre (which, granted, they helped to create), and for that, they’ll probably leave plenty of listeners scratching their heads and adjusting their hi-fis in befuddlement. But a career ender? Hardly. This time round, Wilco have not only redefined their own sound, but they’ve added something to the new-century rock ‘n’ roll mythos to rival Sgt. Pepper’s Lonely Hearts Club Band in its inventiveness and Pink Moon in its melancholy.

On first listen, Yankee Hotel Foxtrot can come across as too eccentric, too noisy, and too disconnected for the casual listener. But with each revisiting, a new layer of the noise seems to click into place, and what’s left at the heart is an eclectic and often somber collection of Americana at its best: honest, open, fragile, shaky, and burdened with an indefinable sadness that tinges even its most upbeat moments.

The noise and bells that open I Am Trying To Break Your Heart serve to effectively disengage the listener from real life, to pull you into the sonically unsafe environment Wilco have created. Then Tweedy’s trademark baritone drawl announces, “I am an American aquarium drinker. I assassin down the avenue. I’m hiding out in the big city blinking. What was I thinking when I let go of you?” This question seems to set the tone for the rest of the album lyrically as well, as the whole thing is thick with longing and seemingly disjointed imagery.

Radio Cure plays like a half-time, detuned fever dream in which Tweedy laments, “There is something wrong with me. My heart is filled with silvery stars.” All this before radio static ushers in the second verse before giving way to the reverberating subtlety of an impromptu country and western style guitar riff and finally breaking into an impossibly singable chorus (“Oh, distance has no way of making love understandable.”).

War On War finds hooks in unexpected digital noise and Tweedy sings that “you have to lose, you have to learn how to die if you wanna wanna be alive.” Jesus, Etc. features genuinely bewildering violin lilts and smoky electric pianos and lyrics about “sad, sad songs tuned to chords strummed down your cheeks.” Heavy Metal Drummer is a rare moment of jubilance – complete with computerised drums and synthesised keyboard runs throughout – about Tweedy’s longing for days of “shiny, shiny pants and bleach blonde hair,” and “playing Kiss covers, beautiful and stoned.”

The standout track here is I’m The Man Who Loves You, which borders on radio-friendly pop by way of a jam session on the back porch (the slide guitar solo here is delightfully fuzzed out and haphazard) before a horn section comes out of nowhere, evoking a bizarre parade scene in which Tweedy acts as conductor, exclaiming in uncharacteristic joviality, “I’m the man who loves you!” Consider the stark contrast to the opening line of the album closer, Reservations, in which he sings, “How can I convince you it’s me I don’t like,” over haunting piano, droning violins, and indecipherable atmospherics.

There is not a moment on Yankee Hotel Foxtrot that is not transcendental and otherworldly. Its scope is breathtaking, its noise is sublimely tranquil, and its soul is deeply rooted in the American music tradition, even at its most violent and experimental. In short, Yankee Hotel Foxtrot is a flawless, all-encompassing album, and a new high-water mark for what rock ‘n’ roll is capable of. It’s an album that pushes the capabilities of recorded sound in completely new and unexplored directions, destined to become the stuff of legends.