by Ben Edgell
published: 9 May 2011 in Album Reviews
Tweet 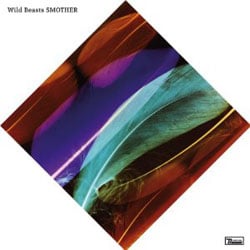 Wild Beasts’ latest is a sublime, alt-pop gem, but that doesn’t mean it will be loved. Like the album’s eclectic and wonderful forebears, Smother will beguile and alienate in similar measure. Yet for those who discover its depths, it is surely one of 2011’s crowning achievements.

The third release from Kendal’s original (and, one suspects, only) art-rock quartet, Smother sees Wild Beasts relocated from the serenity of their Lake District roots to the relative mania of East London – a fact of note simply because their sound has gone completely another way. Compared to the falsetto-led clamour of debut album Limbo, Panto, Smother is both a darkening of mood and a radical slowing of pace. Even those awaiting a follow-up to 2009’s Mercury-nominated Two Dancers – an alt-pop fusion that itself brought down tempo but still retained a healthy dose of the outlandish – may be surprised at the delicacy of the delivery.

Smother is touching and majestic, a surprise of juxtaposition that is at once both plaintive and emotional, strident and libidinous. In no small part, these counterpoints are found in the dual vocal – Tom Fleming’s smooth tenor is now increasingly prominent, and lends a darker hue to Hayden Thorpe’s excitable falsetto. The two gracefully intertwine throughout, and this grants the album an immersive range which lets the mood ebb and flow, seamlessly, to great effect. And this extends to the freedom with which Wild Beasts shift pace – switching perfectly from the sparse, slow-burn of opener Lion’s Share to the sultry, Hercules And Love Affair-like beats of Bed Of Nails. It’s a bold and wonderful mix that captures the best of a band unafraid to explore their lyrical and musical motif, while being blessed with the subtlety to make styles blend with assurance.

In this invention, they’re of a set with Everything, Everything and Hot Chip – playful, intelligent music with soul enough to match its pop hooks, though distinctiveness itself, rather than output, is the common ground here as Smother is a more matured, mellow take. Indeed, direct comparisons are fleeting – sure, Deeper could nestle into Elbow‘s next release (and Fleming could spot for Guy Garvey‘s husk given half a chance), while the sparse piano of Invisible, and Plaything’s synth and drum-loop backdrop, look to James Blake (though overlaid with a maudlin, Antony-esque vocal). But such allusions should be made more to compliment than compare. This is an album that draws on many strengths but betrays few influences, and the relevance of its peers is only in how it stands out, even in such respectable company. All of which of course begs one question: amidst such finery, who could Smother possibly disappoint?

The issue is that Wild Beasts lay themselves open to accusations of an arty affectation, with dense composition and a sense their music is burdened by its own longing to transcend indie mores. For some, Smother will be dismissed with an anti-art-pop sneer and a concluding harrumph. Yet it would be a sad irony to let these conceptions stick when this album really sees them dispelled. While it’s true that Limbo, Panto’s falsetto lustiness skirted the ridiculous, and Two Dancers took itself more seriously than certain tracks merited, this album sees Wild Beasts focus and refine. They temper some of their more outlandish instincts, but retain their characteristic breadth of style and, crucially, that willingness and ability to experiment. The result is a work of rare alchemy: where the art is base, and the pop is gold.

Smother adds to an inventive and eclectic canon. While it stands apart, this is an evolution that will please both Wild Beasts’ early adopters and the many converts that will surely follow from what is, without doubt, one of the stand out releases of the year.