by Michael Cragg
published: 31 May 2010 in Album Reviews
Tweet 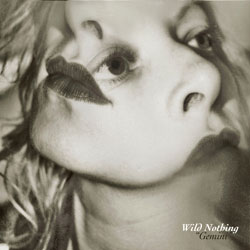 Music tends to follow the general rule of thumb that if you can get three examples of something then it can be called a trend. Only in music it’s called a genre, and it usually ends up slowly ruining the thing it’s supposed to be defining. You get the feeling that as ‘chillwave’ slowly becomes shorthand for everything vaguely summery or a little bit hazy, that in amongst the shimmering keyboards and padded drums you can make out the death knell.

Call it chillwave or dream pop if you like, but one thing no-one could deny is that Jack Tatum, aka Wild Nothing, has created one of the best singles of the year in the shape of the crushingly lovely Summer Holiday. Taking inspiration from those old C-86 tapes that everyone references these days, as well as a large dollop of The Pains Of Being Pure At Heart‘s beautiful melancholia, Summer Holiday is all wistful vocals, strummed electric guitar and teenage heartbreak.

It’s such a perfect four minutes that it casts a shadow over the remainder of what is a good debut album. Live In Dreams and Chinatown come close to matching it, the former recalling Belle And Sebastian had they been brought up in LA, whilst the latter adds some brilliant percussion over lashings of layered backing vocals. Drifter opens with one of those dreamy, circular guitar arpeggios that litter the album but adds booming drums and doom-laden bass that sounds like a slightly more upbeat Joy Division.

The remainder of the album rattles along nicely, but the pattern for each song is so rigid that it starts to become fairly formulaic. Most songs are built around a similar guitar riff and have the same cymbal sound – that high note that comes from hitting the very top of the cymbal – throughout. When it works it’s a treat, but there are times during the 40 minutes that you wonder if you’re listening to the same song again.

As every new band with a faintly beach or seasonal-related name emerges, it’s a given that the chillwave tag will be applied. In some ways it’s a positive – there are some great bands to discover through comparisons. But at the same time, it could still go the way of nu-rave or alt.country, ie. become a bit of a laughing stock. Whichever way it goes, Gemini is a mostly very good example of a sound that takes the best bits of ’80s indie and somehow recreates that feeling you get on those long summer nights, where happiness is tinged with the fact that you know it won’t last.

Wild Nothing MP3s or CDs

Wild Nothing on Spotify