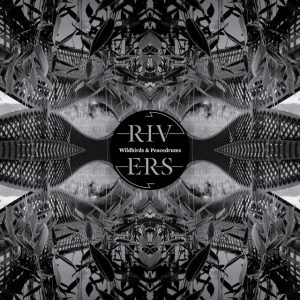 Wildbirds & Peacedrums have provided a breath of fresh air by doing something radical with the duo format. Attempting to create more with less, they have crafted music that is sophisticated and cerebral but also visceral and moving. In Andreas Werliin’s hands, the drum kit could be more than functional, assuming textural and melodic roles. Mariam Wallentin’s voice could unpredictably take flight and appear both passionate and brutal. Expression and interaction of this quality, free from indulgence, immediately elevates a band to a higher level. Whilst they are not promoted as a jazz act internationally, it’s not entirely inappropriate that they have won a major jazz award in their native Sweden.

Rivers compiles two vinyl EP releases from earlier this year (Retina and Iris), making the music available on CD and as downloads for the first time. The EPs are kept distinct on two separate discs. Whilst they vary in texture and mood, they also work remarkably well together, as if representing two sides of the same coin.

Wisely realising that the shock of the new can quickly diminish, Wallentin and Werliin have placed themselves in new musical contexts for Rivers. The five tracks comprising the Retina EP were recorded with the Schola Cantorum Reykjavik Chamber Choir. This ensemble featured on Björk‘s Medúlla, although a more suitable reference point might be the simultaneously icy and sensual intimacy of its predecessor Vespertine. The full list of collaborators is mouthwatering. Bedroom Community noise architect Ben Frost engineered the sessions, whilst the arrangements came from cellist Hildur Guðnadóttir. Bedroom Community label boss Valgeir Sigurðsson performed mixing duties.

Fortunately, the elegantly constructed music more than delivers on its promise. Deploying more subtlety and control does not restrict the group, but leads them towards something striking and profound. Mariam Wallentin’s voice could previously tend toward overt dominance, but here it blends consummately with the choral harmonies. Werliin is similarly restrained, playing less cluttered patterns without compromising his innate musicality. This cascading music deftly combines austere arrangements with the physicality and empathy of spontaneous performance.

The most peculiar of these compositions (and ‘composition’ doesn’t feel too lofty a term given how carefully these pieces are plotted) is Tiny Holes In This World, which is like a funeral march. It is weary, solemn and insidious, appropriately slow in casting its spell. Bleed Like There’s No Other Flood and Fight For Me stand out particularly – with their slippery, imaginative melodic lines and gently propulsive rhythms. The captivating, naturally resonant sound of these performances convey both the group’s confidence and their tenderness. Wallentin has found an elemental purity in her voice by stripping away affectations. The intuitive integration she achieves with the choir makes for richly textured and dynamic music.

The Iris EP, recorded without the choir, is closer in spirit to the rest of their catalogue, but with the duo now as comforting as they are confrontational. Where once anguish might have been Wallentin’s dominant emotion, here there is a lingering sense of hope just beneath the surface. The music here is focused on the steel drum, which strikes a cautious note of optimism, as Wallentin sings hopeful lines (“After the sunrise, something better will come”).

There are some typically inventive moments here. On The Lake, softly brushed drums follow the contours of a syncopated melody, the duo’s extraordinary interaction breathtaking. The Wave exhibits the group’s broad range, beginning with jazzy cymbal rhythms that eventually dissolve into a muscular groove worthy of The Roots. The Well concludes proceedings with impressive insistence – a performance of authority and conviction. It’s as forceful as the fastest of rivers.