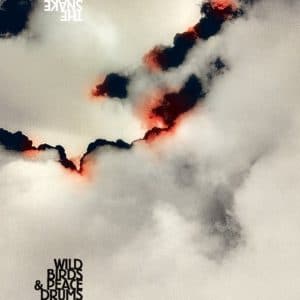 Swedish duo Andreas Werliin and Mariam Wallentins, who won the Swedish Jazz Act Of The Year in 2008, return with a follow-up to their debut album as Wildbirds & Peacedrums, Heartcore. On The Snake the talented duo have created off-kilter music consisting mostly of Werliin’s polyrhythmic drumming and Wallentins’ insistent crooning. Wildbirds & Peacedrums is a fitting name for a group who emit such visceral, tribal sounds.

Opening track Island eases into things with Wallentins’ gentle singing. Her soft but dramatic tones resonate like a graceful aria mixed with a funeral dirge. It’s a solemn meditation that pulsates with energy, a song that could be found in an opera or religious rite and serves as a calm introduction to the cacophony to follow, centred on Werliin’s drumming through the rest of the album.

There Is No Light starts with a build-up of African-style drumming and erupts when Wallentins calls out with the insistence of Janis Joplin: “There is no light, there is no light / My eyelids ache from too much darkness.” The drums get louder, the vocals get more powerful, and cymbals start to crash in from all sides. There’s a loose melodic flow to Wallentins’ words, but the rhythms and raw energy are the main focus.

Despite their minimal use of instrumentation, Wildbirds & Peacedrums manage to create a variety of different types of songs. Most tracks feature only drums, vocals, and one harmonic accompaninent, but the arrangements display a creative flare. Places starts out resembling a Santigold or M.I.A. track with a hip-hop beat, but halfway through, the drums cut out and Wallentins spins into an almost R&B a capella section. A steady beat re-enters the track, this time with a heavy swing rock feel.

Songs like So Soft So Pink and Great Lines are calmer, showcasing Wallentins’ softer vocal side. But other sections of The Snake stand in eccentric contrast to the dancey songs and ballads: Chain Of Steel progresses from a Motown feel into utter pop chaos; Why Ho Ho Ho features a sitar and spooky whispered vocals; and My Heart flutters by in a delightful bounce of indie pop.

Over all the exciting sounds, Wallentins sings passionately about love, heartbreak, and darkness with powerful imagery. On the emotional closer My Heart comes the lyric: “I’m lost without your rhythm / My heart don’t know that even the fastest will get older.” On Who Ho Ho Ho, Wallentins and Werliin lament together: “I am your morning, and you are my morning light / Let’s wake together, meet the darkness together / Feel the hours expand and lick them dry.”

Wildbirds & Peacedrums push the boundaries of jazz, pop, and experimental music until they fuse, and The Snake is a long, cohesive work that holds together well because of strong song arrangements. Wallentins’ and Werliin’s emotions come through on every track and inspire repeated listens. It’s a challenging but ultimately very rewarding listening experience.