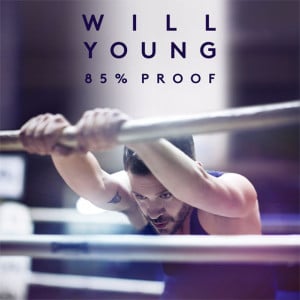 Reviews of Will Young‘s albums these days fall into two distinct camps; those who must mention that he first became famous on some TV talent contest long forgotten and ignore the passing of time since, and others who accept that, as he ventures into his second major label deal, he’s more than just a pretty – and these days hirsute – face; a career that’s lasted well over a decade in pop world, that most fickle of places, surely has something of note about it.

Young isn’t so young these days, but on the evidence of 85% Proof, his sixth album, he’s maturing like the finest bottle of scotch. By down the years changing the bare minimum of his formula for success – universally vague lyrical sentiment over seemingly new yet always somehow familiar soul-tinged pop music – and evolving only at a pace his audience can keep up with, he is making his career last. With a few exceptions, 85% Proof’s songs – and much of his material to date – are unremarkable pop factory fare, but they’re polished with loving care and showcase the one thing above all else Young has always had going for him; that unmistakable voice.

Having left Sony, where he’s been berthed since his first release, and signing with Island, his star status – at least in his homeland – is again underlined. This is a talent contest winner, lest we forget, who’s been in a film with Judi Dench, appeared as a panelist on Question Time and taken the role of the MC in Cabaret on a London stage, and he’s here demonstrating the professionalism he brings to all of these outings. To some it will all be limply dull but, in its absolutely focused and uncompromising way, it’s curiously admirable.

It is certainly true that these songs are not going to change the world any time soon. U Think I’m Sexy doesn’t know whether to agree with or scoff at the idea. Love Revolution sounds less like an insurrection of the heart and more like a cat being molested, while Gold conversely is so sedate as to be on its back making mewling noises as its tummy is tickled and its paws punch the air. Promise Me sounds like an Emeli Sandé outtake; Thank You covers similar territory, all gospelly ladies, Coldplay-lite piano and shimmy not-ever-too-fast beats. When you bring nice Will home to meet your mother and prod him to do his thing and get singing, this is the material the old lady will instantly love.

In amongst all this are those reminders that straightforward melodies and a unique voice maketh not only a great song but, in Young’s case, a man and his career. He’s able to sound strident one moment and incredibly vulnerable the next, and never does he seem to be acting. Opener Brave Man is a case in point – a classic Young track that shows the way to the latter-day likes of Sam Smith, it lets his typically intelligent interpretation of the lyrics emote naturally and without histrionics (he’s never one for those). Later on, Like A River sports some attention-grabbing falsetto crooning over a needling guitar riff, insistent bass drum and stark piano notes, reminding of Older era George Michael. It’s in this world that he’s most comfortable; as with Jealousy, from his last album Echoes, I Don’t Need A Lover transcends its shiny, pop-to-order surroundings and dazzles.

But what 85% Proof is, above all, is comfortable, with all the pros and cons that entails. While it’d have been nice to hear some different musical explorations underpinning that soaraway voice – Fred Falke‘s remixes of two of Young’s tracks a few years ago hinted at a chillout dance vibe that suited him superbly – and he could do with at least one earwormy banger with which to remind the world beyond the high society calendar of the Home Counties that he’s more than just a well-spoken crooner with a pleasing face, 85% Proof will delight fans that these days include royals, celebrities and not a few music snobs who’d otherwise have thought themselves rather above such inoffensive, polished pop fare.

Will Young MP3s or CDs

Will Young on Spotify