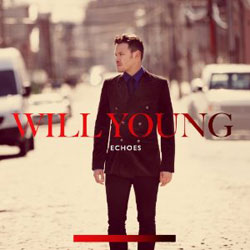 One of the earliest and smartest of pop idols, Will Young is releasing his fifth album (excluding 2009’s The Hits) to coincide with the 10th anniversary of his original TV show victory. Now in his early 30s, this release – like his career to date – offers a routemap for the elegant evolution from the most throwaway of initial successes to something much more enduring.

What is immediately striking is the apparently intensely personal nature of much of the material. Delivered in Young’s tuneful yet frequently vulnerable vocal – all fragility and contrasting strength – songs like Come On (“There’s a little bit of me that will always be with you”), Silent Valentine and Personal Thunder are delivered like he genuinely means them: a welcome and relatively rare quality in the modern pop song. Witness the lovelorn admission that “There’s a bit of me that will always be with you” on Come On; or the shamefaced “I don’t want to ask too much of you / I’ll just get drunk and let you down” from Lie Next To Me; or most of all the melancholy, confessional Outsider.

Young’s playful, saucy side does emerge occasionally: most resolutely on I Just Want A Lover – a funky paean to the straightforward, no-strings-attached shag. Even here, though, his vulnerability refuses to be totally buried. For all the pleas for “nothing that is complicated … I don’t want to know you”, there is still the admission that this is escapism to “ease my broken heart”. The track, at times recalling Imagination‘s Body Talk (“Let me hear your body talking”) is one of the album’s strongest.

Also great are the first track – also the first single – Jealousy (a great pop song, with its combined hint of both melancholy and imminent seduction, to an underplayed disco soundtrack), Outsider and Silent Valentine. This latter is probably the album’s finest moment: a beautiful torch song, beautifully delivered, to a secret, lost, object of desire. When he swoons “You’ll always be my silent valentine” and admits that “It’s been three years or maybe more / Feels like a day / Still you make my heart ache” the listener swoons and aches right alongside him.

Interestingly, and presumably quite deliberately, the album is pitched on a fault-line between slow balladry and out-and-out “dance music”. Nods to disco and funk are discernable in Jealousy, I Just Want a Lover and the S.A.W.-slash-Hi-N.R.G. Good Things, but a kind of sedate, almost dignified, certainly mature feel always wins out. This is an album as unafraid of pianos (Runaway, Outsider, Silent Valentine, Hearts on Fire, Good Things) or strings (Jealousy, Come On) as it is of wearing its wounded heart on its sleeve.

Not simply a fitting commemoration of Young’s longevity then, but this release is also a clear illustration of why he has succeeded in transcending his origins. Now arguably one of the UK’s most authentic, honest and engaging stars, he is perhaps the first TV show alumnus to attain true “idol” status.

Will Young MP3s or CDs

Will Young on Spotify