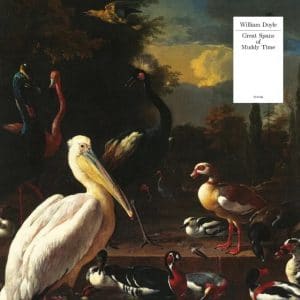 You may remember William Doyle as East India Youth, the genre-hopping one-man band who made two albums before Doyle decided to retire the moniker and make music under his given name. Doyle then self-released a few albums of ambient instrumental music, before the excellent Your Wilderness Revisited appeared in 2017.

Your Wilderness Revisited saw a return to the more traditional ‘songs’ of East India Youth, but Doyle’s trademark (his willingness to seamlessly explore different styles, often in the same song) remained.

The follow-up, Great Spans Of Muddy Time (named after a quote from TV horticulturist Monty Don about depression) mixes the vocal led songs with some more experimental instrumentals – much like in David Bowie‘s Berlin era. And it’s that version of Bowie that comes to mind a fair bit when listening to Doyle, especially on the hypnotic, clattering Shadowtackling or the eerie, unsettling formless noise of A Forgotten Film.

A whole album of this may be a bit hard to take, but luckily Doyle mixes in some more accessible tunes as well. Opening track I Need To Keep You In My Life is full of yearning and heart, with a synth backing reminiscent of Stephin Merritt’s work with The Magnetic Fields. That’s followed by And Everything Changed (But I Feel Alright), the sort of heartfelt mid-tempo ballad that Ed Harcourt‘s so good at, with an added guitar solo that becomes ever more unhinged as it goes on.

One thing that Great Spans Of Muddy Time lacks is the coherence of Doyle’s previous work. That’s due to no fault of Doyle – during the recording of the album, his hard drive failed and several tracks were lost. So there’s a necessarily piecemeal approach to the record, with some pieces sounding unexpectedly brief and ending suddenly.

Yet at times, those songs catch you unaware with just how affecting they can be. Nothing At All has a lovely swaying chorus that buries into your brain almost imperceptibly, while St George’s Hill has some lovely bursts of harp which contrast nicely with the discordant scrapes of noise on the following Semi-Bionic.

It probably won’t be to everyone’s tastes – at times, it all becomes a bit too doomy and inaccessible, such as on Theme From Muddy Time – and newcomers to his music may be best pointed towards Your Wilderness Revisited instead. Nevertheless, this is another fine example of Doyle’s talent – and, considering he only turned 30 earlier this year, indicates a lot more to come in the years ahead.