by Lily Middlemass
published: 14 May 2012 in Album Reviews
Tweet 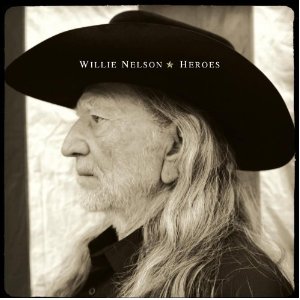 As far as institutions of country music go, Willie Nelson is up there with the best of them. With a backlog of over 60 studio albums, plus 10 live albums, his career has been prolific and highly accoladed; he has won 37 awards, most of which are Grammys or CMAs. With such an incredible catalogue of work, Nelson has unsurprisingly spanned both critical and commercial success, frequently topping the charts throughout the decades, though never straying from his distinctive style and ethic.

Though Nelson is by definition a country artist, his music shows a kaleidoscope of influences, from blues to folk and rock’n’roll; and his collaborations, too, have always been varied and inspired, whether on single songs or on entire albums, with iconic artists such as Johnny Cash and Dolly Parton.

Heroes, his latest album, carries on this tradition, citing names as diverse as Snoop Dogg and Sheryl Crow, as well as his own son, Lukas Nelson. The album is also replete with names from the country music scene: Merle Haggard features on classic A Horse Called Music; Ray Price features on Cold War With You; Jamey Johnson sings on Roll Me Up And Smoke Me When I Die (along with Snoop and Kris Kristofferson); and Billy Joe Shaver is credited on Come On Back Jesus. The LP is hardly lacking in credentials in this respect and it’s clear that Nelson can still pull in big names to bolster the quality of his work.

The album’s strong repertoire of songs over 14 tracks displays the different sides of Nelson’s music and talent to their best. His voice sounds a little older and wiser than on past albums, but then he is now nudging 80, and if anything it gives his voice a greater depth and authority than in the past.

Arguably, his voice is at its most affecting when he is singing the more emotive, slower and bluesy songs on the album. On Heroes, these are songs such as No Place To Fly and The Sound of Your Memory, as well as cover versions The Scientist (yes, Coldplay‘s) and Just Breathe (originally by Pearl Jam). Nelson’s voice skilfully straddles different elements of pathos in songs like these, his beautifully strained, country vocals drawing out pain, nostalgia, love and heartbreak in equal measure from the listener. His voice is complimented beautifully by the sweet twang of the melodies, which have, of course, traditional and definitive country sounds.

His cover of The Scientist is particularly interesting; the song is, in some ways, unrecognisable in this format. It’s not a song you would immediately associate with an act like Nelson, but as he begins to sing the lyrics, you can see why they would appeal; the track sounds like an original version, which Coldplay themselves might have covered and updated. It’s not quite Johnny Cash covering Nine Inch Nails, but it’s not far off.

For the uninitiated, however, Willie Nelson’s back catalogue will almost definitely appear intimidating and at such a late stage in his career, he’s unlikely to pick up a legion of new followers. The inclusion of a Coldplay song is a nod to modern music, without coming across too desperate; but the inclusion of Snoop Dogg as an artist on Roll Me Up seems a little incongruous. For sure his fans will not be disappointed. Nelson’s voice is the shining star on this album, and that feels like the only thing that matters.