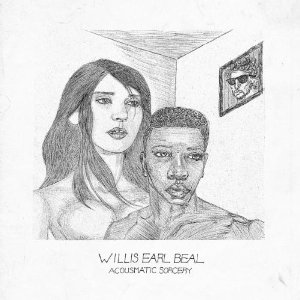 You’ve got to have a backstory. It didn’t do Bon Iver any harm, when he retired to that infamous log cabin in a remote forest, and even now people who should know better are still arguing over whether Lana Del Rey was really a mysterious, trailer-dwelling ingenue or a posh girl called Lizzy who got lucky.

Willis Earl Beal’s backstory is suitably engaging. Legend has it that he first came to prominence by recording lo-fi demos and leaving the CDs in random locations around the United States. On his website, he publishes his personal telephone number, and invites you to call him and he’ll sing you a song. If you email him, he’ll draw a picture for you. The fact that he’s just suddenly seemed to appear from nowhere, with no online buzz or carefully generated record company hype only makes him all the more intriguing.

True, the fact that he recently reached the ‘Boot Camp’ stage in the US version of The X Factor has made some hipsters rather nervous, gingerly backing away while muttering ‘remember Lana, remember Lana’, but one listen to his debut album Acousmatic Sorcery should be enough to convince you that Simon Cowell would have had an almighty fit had he somehow ended up winning the thing.

For Willis Earl Beal sounds like very little else on Earth. There are tracks such as an instrumental played on a Bulgarian lap harp, there’s percussive-heavy rap songs, there are deathly slow soul ballads, and some old-school blues that you’d swear were recorded about 80 years ago at a dusty crossroads somewhere.

Dominating everything is Beal’s voice, which is utterly extraordinary. On Take Me Away he growls and hollers like a young Tom Waits; at other times he adopts a soulful croon. He’s already been compared with Daniel Johnston, but Beal is no copyist, and the variety of tones on display here is intriguing.

Take, for example, Evening’s Kiss. Here, Beal sounds devastatingly vulnerable and frail, softly whispering over a gently plucked acoustic guitar that he’s “still disillusioned and cool catatonic” and “full of shit and doubt”. A few tracks later, Swing On Low kicks in with an exhilaratingly addictive rap – Beal may not be a Jay-Z or Rakim when it comes to flow, but there’s something irresistible about the way he spits out the verses before switching to a deep baritone for the chorus, all the while accompanied by what sounds like a small army bashing seven bells out of some tin cans.

It’s true that the production may put some people off – this is about as far from glossy studio pop as you can imagine. Ghost Robot sounds like it was recorded in some sort of swamp while the percussion on Bright Copper Noon is so high up in the mix to be almost painful. Yet the very same recording technique gives Acousmatic Sorcery a sinister, dark edge – closing track Angel Chorus could be almost scary if listened to alone in a dark room, especially if you keep listening after the song apparently ends when you’re treated to a five-minute long Gil Scott-Heron-style monologue.

Yet at his best, Beal can touch your heart and your feet. The aforementioned Evening’s Kiss is pure, understated brilliance while Monotony is a lovely stripped down ballad. If his lyrics may sometimes make you cringe (such as Ghost Robot’s “I’m freewheelin’ like Bob Dylan”), the chutzpah he displays in his delivery means he can get away with it.

Acousmatic Sorcery won’t propel Beal to Lana Del Rey levels of fame (and certainly not labelmate Adele-style ubiquity) – it’s too weird, too spooky, too idiosyncratic for that. For those who do connect with Beal’s gloriously skewed vision though, you’re in for a treat. Just thank your lucky stars that Simon Cowell passed on him.