A Winged Victory For The Sullen – Atomos 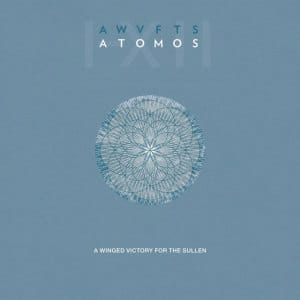 Out of all of the incredible artists signed to Erased Tapes there has always been a feeling that it is the music of A Winged Victory For The Sullen that is the most distilled, crystalline and pure. In a year that has seen the label release a number of albums that have quietly expanded their usual boundaries it seems only appropriate that Stars Of The Lid‘s Adam Wiltzie and Dustin O’Halloran follow suit on their second full-length work, Atomos.

The album’s origins can be traced back to Royal Ballet choreographer Wayne McGregor playing their music during rehearsals with his dancers and witnessing the positive reaction and natural fit. A request from McGregor for Wiltzie and O’Halloran to write a score for a forthcoming Random Dance Company production followed and the resulting compositions gradually began to form the basis of their second album that consists of 11 individually numbered pieces named after McGregor’s work.

In some respects it is a meeting that throws out a contrast on paper – an artform centred on human movement being soundtracked by a duo that have placed stillness at the core of their music. Yet, there is also grace and beauty in abundance and, in this context, the coming together makes complete sense.

The beams of melancholy that extend from the elongated, suspended notes of opening piece Atomos I prove that there is musical carryover from their eponymous debut album of 2011 and the soft, shimmering drone of Atomos II furthers this view. These early tracks have a church like solemnity that encompass variations on cello and piano, with Atomos III in particular seeming to reach out to gracefully grasp at some undefined desire or outcome.

It’s not difficult for lesser artists to underwhelm in this genre but AWVFTS never run the risk of doing so, delivering a consistently engaging not to mention sumptuously beautiful listen. Their sound may on the surface appear cold and distanced but human sentiment is never too far away. Atomos arguably might not have the out and out emotional blockbusters of the first album and it is perhaps not quite as unremittingly sad overall (although it is still heavy with gravity and pathos). Yet, the ideas and elements we receive instead make for a more complete, satisfying album.

A sustained sense of snowdrift permeates Atomos V, proving they are still masters in soundtracking the concept of time standing still (but, impressively, broadening the ways in which they do it). It is also visible in the minimalism of Atomos VII which starts with single piano notes drifting in, which are later replicated by simple cello strokes. As it progresses it manages to summon significant momentum from similarly modest musical resource before bass-like rumblings enter the fray. Shifting synthesisers form the basis for Atomos VIII, hinting at the rarest signs of rhythm before strings rise immaculately to surround. More strikingly, Atomos X sees tiny distorted vocal fragments infiltrate their sound. Atomos XI meanwhile sees the surfacing of a piano-led melody which unexpectedly recalls some of the soundtrack work of Yann Tiersen. Atomos XII closes the album by linking it back to the start, but in even sparser style, the cello receding into slow silence.

They are undoubted experts in their field of work but there is no sign of A Winged Victory For The Sullen settling for the easy option or retreading ground. Atomos is an outstanding, thoughtful piece of work which should see their reputation rise to a new high.