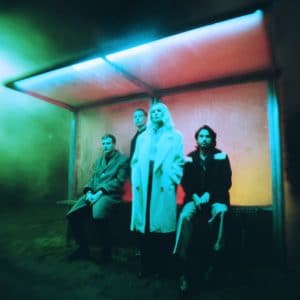 Four years ago, Wolf Alice won the Mercury Prize for their second album, Visions Of A Life. The list of bands who have been scuppered trying to follow up a Mercury Prize winner is long – for the likes of Gomez, Klaxons and Speech Debelle, it seemed to mark the point at which their careers started to downturn.

It only takes a few moments listening to Blue Weekend to realise that is not a fate which awaits Wolf Alice. This is an album which feels like a huge step forward, a statement of intent even. The choice of Markus Dravs as producer is a wise one – the man who remoulded the sound of the likes of Arcade Fire and Florence And The Machine has created a huge canvas for the band to properly develop on.

Like all the best albums, Blue Weekend hops from genre to genre. There’s mosh-friendly punk on Play The Greatest Hits, which follows the beautiful FM rock ballad sheen of How Can I Make It OK. There’s sad break-up songs like No Hard Feelings and defiant, gnarly rock like Smile. Above all, there’s a swell and confidence to the entire album – about two minutes into the opening track The Beach, you realise you’re listening to something very special.

The dreamy sway of Delicious Things is an early highlight, in which Ellie Rowsell beautifully describes feeling “socially anxious and a long way from home” while visiting Los Angeles. Whether it’s lying in bed with a man called Adam (“I think he is a bad man, he likes the fact that I play music in a band”) or dabbling in drugs (“If you’re all popping pills, you know I won’t say no”), Rowsell beautifully describes the weird, out of body pull that a newcomer can experience when visiting LA.

Smile has a bite and thrust about it which grabs you right from the start – it almost feels like a musical manifesto with lines like “I am what I am, and I’m good at it, and if you don’t like me, well that isn’t fucking relevant”. It bursts into life in the chorus, with the sort of irresistible swagger that you can only imagine how great it would sound in the live arena. The fact that it’s followed by Safe From Heartbreak, which sounds like it could have been an outtake from the last album by The Staves only demonstrates the band’s impressive range.

The more reflective moments work equally well. How Can I Make It OK is a synth-heavy ballad with an understated chorus that buries itself deep inside your head, while No Hard Feelings is a delicate break-up song which pairs Rowsell’s tremulous vocals next to Joff Oddie’s intricate guitar riffs while namechecking Amy Winehouse songs (“crying in the bathtub to Love Is A Losing Game”).

It’s The Last Man On Earth which really marks Wolf Alice’s arrival into a whole new stratosphere though – beginning as a fragile piano ballad before swelling gloriously into a huge, choral-led number. If our lives ever return to normal, it’ll be this song ringing out from stadiums over the next couple of years.

By the time The Beach II rolls around to close the album, you’ll want to go back to the start and listen to it all again. Blue Weekend is Wolf Alice’s best work yet – a confident, euphoric, blistering 40 minutes that’s guaranteed to be on many people’s ‘best of’ lists at the end of the year. Never mind the Mercury Prize – this is an album with its sights firmly set on the Grammys.