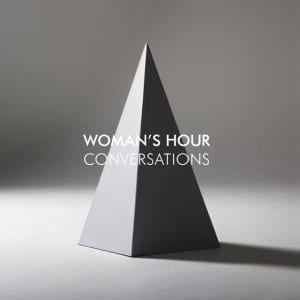 Woman’s Hour is a BBC Radio 4 programme aimed at females, with newsy bits and culture abound. It’s not an obvious source to reference when naming a band, but a trio from Kendal (famous for cake that bafflingly isn’t cake at all – sorry kids – and Wild Beasts) have done just that. Fiona Burgess (vocals), brother William Burgess (guitar), Nicolas Graves (bass) and Mancunian Josh Hunnisett (keyboards) make up Woman’s Hour, whose highly anticipated debut album is named after what happens on Woman’s Hour – Conversations.

Formed in 2010 as a trio, their first performance was held at a hat themed party at the singer’s Camden pad following relocation to London; it was here that they first met Hunnisett. The Radio 4 thing was taken further, each demo named after a Radio 4 programme, or in the case of first single Jenni, after a presenter (Jenni Murray of, you’ve guessed it, Woman’s Hour itself).

Since then the quartet have reinvented themselves, the early sound abandoned as they started from scratch. ‘Comeback’ single Our Love Has No Rhythm showed where their journey had gone, an atmospheric minimal electro sound where a dainty guitar line and handclapped percussion slink along accompanied by Fiona Burgess’ vocals, but the underlying message of the song title is repeated six or seven times during the first half of the song and, despite being rapturously received by several critics, it’s rather uninspiring.

It’s common for an album to be released in conjunction with a second single but Conversations sees an entrance having spawned several other tracks in addition to the aforementioned cut. Her Ghost is another; captivating minimalism sees the song follow a safe chord sequence alongside shimmering synths. It’s a better song for sure. Another single was Darkest Place and this is a highlight, another shimmering soundscape focusing on sublime atmospherics, the second half of the song being mainly instrumental with some vocal ‘ooh ooh oohing’ creating something that wouldn’t look out of place on the soundtrack to The Beach.

The title track is the latest single: with a backdrop bearing similarities to Fleetwood Mac, the more upbeat track is pleasant but seems to be missing something special, a contribution that Fiona Burgess’ vocals do not, sadly, offer, sounding more identical at every turn. It’s a beautiful voice for sure, but the Dido like lack of variety and emotion becomes tiresome over the course of 11 tracks. Indeed, this is generally where Conversations is lacking – stand out songs and melodies.

Album opener Unbroken Sequence is all very gentle synth pop as the soft, hushed vocals marry with a basic synth melody but its dreamy chorus isn’t the most memorable. In Stillness We Remain is again minimalist, with bass notes puncturing the subtlety and light percussion; when it gets going it’s decent enough, just not enthralling.

Album closer The Day That Needs Defending, however, is a gem. Heavily based in electronica, a staccato synth attack blends with a gorgeous synth backed chorus and layered vocals up to its conclusion – easily one of the best tracks here. Unfortunately, some tracks such as To The End and Reflections offer little, approaching sheer boredom with their dreariness and likely to encourage fast forwarding or worse still, a power off.

The buzz around Woman’s Hour has been overwhelming and the admittedly gorgeous sound of both the music and vocals is sublime but rather like Radio 4 in general, it’s okay in small doses but lengthy exposure becomes tedious. The promise is unquestionable but the songs and melodies aren’t memorable; this is hopefully all part of the transformation and something that will develop as they enter the next stage of their intriguing growth.