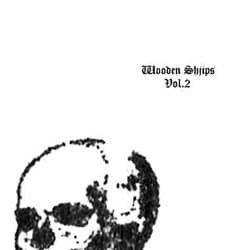 San Franciscan quartet Wooden Shjips here present their prosaically-named second compilation of rare “hard to find” tracks, after 2008’s – yup – Vol 1. No weirder-than-thou fragments and rejected material here, though: this is a seven-track collection that holds a general, accessible appeal for fans of all things sunfried and fuzzed-out.

A quick scan of the track titles will, on its own, give a reasonable clue to the musical content. As Start To Dreaming, I Heard The Vibrations and Outta My Head attest, this is ’60s-steeped, trippy, hippy, occasionally blissed-out fare. Guitars are psychedelic, and combine with organ sounds to create swirling patterns, with opener Loose Lips setting the template that most other tracks follow. Death’s Not Your Friend, Contact and I Heard The Vibrations too all feature protracted wig-outs, the musicians riffing and improvising around a tune or theme to the point where individual tracks become indistinguishable through the agreeable musical haze.

Parallels with contemporary bands mining a similar retro territory can be drawn, if drawing parallels is your thing. I Heard The Vibrations recalls Brian Jonestown Massacre or some of the more straightforward moments of Sunburned Hand Of The Man, say, as much as Loose Lips recalls The Doors, although the latter is also curiously (and no doubt coincidentally) similar in melody to The Human League‘s Being Boiled.

Two cover versions are included. The first is Neil Young‘s track Vampire Blues, part of his 1974 album On The Beach’s “blues trilogy”. It’s the album’s standout track, the band having endowed Young’s already terrific original with an added sense of urgency and energy. The second – Contact – is a 1968 Serge Gainsbourg-composed, Brigitte Bardot-performed number. This tambourine-heavy version is as markedly different from the original as one might expect, removing the stridency of Bardot’s delivery, and replacing it instead with a fragmented, bitty, often creepy vocal and a sly and insinuating mood of which one might imagine Gainsbourg thoroughly approving. Live track Death’s Not Your Friend is remarkable for demonstrating just how well the band match their studio sound in a live setting, only the audience noise at its opening and close indicating that it is any different from the other six tracks.

Throughout, the vocal effect is echoey and spaced-out, sounding stoned and undemonstrative as befits the band’s style. Lyrics are mainly indecipherable, and take a back seat to the music. The sound is dense and opaque, with guitars swirling and sometimes screeching (Start To Dreaming, Contact), and organs filling in gaps. The tone noticeably lightens on closing track Outta My Head, when the organ/synth takes on the song’s main melodic load. In the main, though, there is not much space or differentiation between tracks.

Whilst probably not the most sensible place to start with an exploration of Wooden Shjips (for that, try 2007’s self-titled debut, or its 2009 follow-up, Dos); it nevertheless gives an accurate depiction of the band’s hazy, woozy, sound and doped-up charms. Just try not to inhale.