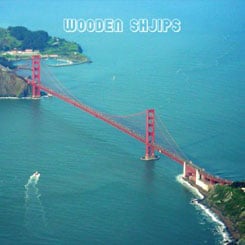 Wooden Shjips’ third album West finds them in a proper recording studio for the first time. Previous efforts have all been laid down in a rehearsal room, a methodology that, far from hampering them, merely served to add to their charm.

Any fears that a more professional approach might upset Wooden Shjips’ sound are laid to rest within seconds of West rumbling into life. Phil Manley’s production ensures that the band sound expansive when they need to, and robotically tight when their droning soundscapes morph from the psychedelic into the mechanical. Coupled with Sonic Boom’s mastering, as a result West is considerably more dynamic and vibrant than anything they’ve done previously.

Most bands tend to develop and head into experimental territory by their third album and try to do something a little different. But Wooden Shjips have always been experimental from the very beginning. Admittedly the experiment tends to focus on finding a gloriously repetitive riff (two chords will suffice), immersing it in a layer of fuzz and then playing it for as long as it takes for the scales to drop from the third eye, making the heavens visible. When the results are as pleasing as they so often are when Wooden Shjips lay down their single minded grooves, there’s no harm in a little (or continuous) repetition.

Black Smoke Rise kicks things off nicely with a Black Rebel Motorcycle Club style riff, although purists will point to its roots being in the filthy outpourings of The Stooges or The MC5. Despite being swamped in buzzing guitars and spectral guitar solos, it’s the melody in Ripley Johnson’s vocals and the swirling organ cutting across the track that give it real substance and prevent it becoming an entirely bleak affair.

Crossing follows in a similar fashion. A basic guitar pattern played continuously until it starts to lose any semblance of pattern whatsoever. Yet there’s something distinctly upbeat and positive about Crossing that’s at odds with the darkness found in Black Smoke Rise. Perhaps it’s the off-kilter desert fried guitar solos, or the resemblance to The Doors‘ paean to an LA Woman, but there’s sunlight laced into these grooves.

Lazy Bones meanwhile is anything but lazy. A frantic drum pattern ensures that the hypnotic guitar overlays never quite get a hold long enough to cast their trance effectively. Most excitingly it manages to sound like a supercharged and monumentally stoned version of The Monks.

Home meanwhile keeps things nicely toasted but the shuffling Neil Young riff that drives the song on is peppered with tension and a palpable anxiety. Johnson’s vocals contain an urgency that is frequently absent in his usually apathetic style. Likewise the guitar solos that wind in and out of the main riff are instilled with a purpose and, rather than faltering due to over indulgence, serve to push Home into the realms of the transcendent. It could just be Wooden Shjips’ finest moment.

Following close behind is Flight, which makes a definite bid to be one of the hightlights of the album. A relentless stoner rock tune, it is utterly unforgiving and strangely invigorating.

While Looking Out’s Hawkwind haze leads into the backwards-tracked Rising, which revisits an old trick and sadly does nothing particularly inventive with it, it’s the anticlimactic end to an album which for the most part shows just what Wooden Shjips are capable of. At times it can become something of an amorphous blob, with songs blending into one another, but the highlights of Home and Flight ensure that there’s something tangible to hang on to.