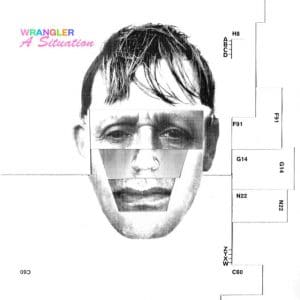 A kind of experimental electronic supergroup, Wrangler are named for their self-assigned mission: to wrangle new sounds from old equipment. The gear comes courtesy of analogue synth wizard Ben Edwards, better known as Benge, and his co-wranglers are Stephen Mallinder of dark new wave legends Cabaret Voltaire and Phil Winter from the experimental folk group Tunng. What was conceived as an exploratory project has turned into a band with real longevity: after two albums plus a collaboration with John Grant as Creep Show, they are now onto their third LP.

From the outset, A Situation is a black hole of an album: cold, dark, even nihilistic. It’s easy to get drawn into the music but it doesn’t offer any obvious exits or conclusions. Opening track Anthropocene refers to the geological epoch du jour: an age in which the fabric of the Earth has changed beyond recognition thanks to the influence and activity of humans. It sounds like a song from both the future and the past, as though someone came up with the idea years from now and then sent it back in time to be assembled and processed at a time when electronic music was new and exciting. Mallinder’s vocals, which have a character here not unlike David Bowie’s voice on his later albums, are cold yet sound full of angst as he parses the present.

Machines Designed (To Eat You Up) is similarly topical, either predicting or satirising the ascent of artificial intelligence. All bleeps and whirrs, with fragmentary lyrics that speak of things like spyware and ‘algorithmic fact traders’, it’s like a dystopian update of Kraftwerk’s The Robots: 21st century technology reduces us to unemployed husks fit for little more than being farmed for data. The unspoken punchline to this dark joke is of course that without machines – Benge’s famously impressive synth library – the song itself would not exist. It’s a product of a man-machine symbiosis: musicians and equipment working in harmony.

Rhizomatic is the most musically interesting song here, beginning with otherwordly pads, videogame bass synth and what sounds like distorted vocals providing a kind of sub-bass. It shimmers like a future city as it skitters around a groove that you can almost imagine Prince coming up with. Anarchy Of Sound – a strange song title in an album that for the most part sounds so tightly controlled – opens, after a minute or so of minimal techno, with the grand statement ‘”Rhythm is the architecture of life”. A couple of minutes later, once the song has pulsed through peaks and lows, Mallinder juxtaposes “Eucild patterns, discotechques”: classical geometry paralleled in sound.

It’s worth noting that Mallinder’s musical thinking has admirable depth. He has a PhD in popular music: his thesis is entitled ‘Movement: Journey Of The Beat’, and in it he sets out to address “the trajectory and transition of popular culture through the modality of rhythm”. With this in mind, A Situation can be heard as an artistic, practice-based counterpart to Mallinder’s academic work, processed through Benge’s prodigious studio and Winter’s vision. This highly rhythmic exploration of the confusing and challenging era in which we live suggests that music can invite us to consider complex questions and phenomena just as effectively as scholarly work – and you can’t dance to a PhD thesis.