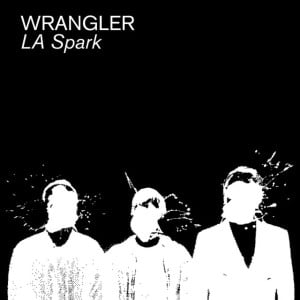 Known to-date for their live improv shows alone, Wrangler are in many ways an electronic supergroup, though the very concept is at odds with their relative stature and their purer-than-pure objectives. Here are three experienced campaigners who have previously made their mark under different guises, absorbed the acclaim of their peers and continued to thrust ever-onwards to further explore, expand and extrapolate the finer aspects of their genre.

In the case of this particular trio – Stephen Mallinder (ex-Cabaret Voltaire), Phil Winter (Tunng) and Benge (producer, “analogue gear wizard” and John Foxx & The Maths collaborator) – it’s a remit that’s unlikely to result in commercial success. In fact, their niche appeal isn’t so much implied as ingrained: here we have a band whose aim is to simultaneously confound, contort and captivate the listener’s ear; whose target market is seriously dedicated fans of proto-electro; whose first album proper represents their best attempts to retrieve sounds from the golden age of analogue-electro and update them for 2014.

The stage is set with Theme From Wrangler, an opener that suits its title: pulses juxtapose against clipped percussion and an undulating lead riff before Mallinder pipes up with slightly menacing vocals. It’s every inch the opening number to some long-forgotten sci-fi, a patient, slow-burning statement of intent that crescendos organically despite its electro component parts. Lava Land is similarly suitably named, its low-bitrate vibe thrusting it into crude-yet-addictive videogame score territory – at least until a freewheeling synth lick again paves the way for some sinister snarling from the frontman.

It is, perhaps, a measure of Wrangler’s combined abilities that they’re able to coax their formula into subtly-defined shapes and guises without LA Spark descending into repetitious indulgence. For instance, there are few absolute distinctions between Space Ace, an industrial, thudding, trance-like meditation, and Harder, a paranoid, percussive, pulsing effort where phased vocals unnerve – yet the two tracks are chalk-and-cheese next to one another in the running order, the listener rarely afforded the time and space to get comfortable.

And that appears to be the whole idea, really: eight tracks made by purists for purists; a blueprint from the past brought carefully up to current-day code; a shared, palpable unwillingness to dumb down. The album’s final pairing – Modern World and Peace & Love – sum it up: the former proffers unsettling carnival beats and tones before the latter, originally commissioned by Tate Modern, lathers the affair with an ambient thrum. All chords were wrought, no doubt, from lovingly restored analogue equipment, lending weight to Benge’s assertion that Wrangler’s objective is to use “lost tech to make new themes for modern world”. It sounds for all the world as if they’ve succeeded.