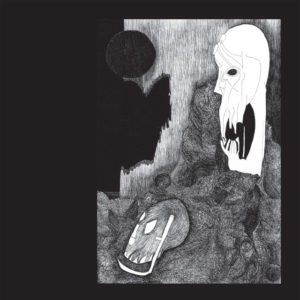 Wrekmeister Harmonies’ JR Robinson is in some kind of creative whirlwind at the moment. It’s only been a year since the quite phenomenal Night Of Your Ascension, and already he’s back with another album that somehow not only matches but perhaps surpasses its predecessor.

Whilst Wrekmeister Harmonies serves as an outlet for Robinson and to a lesser extent his co-conspirator Esther Shaw, Night Of Your Ascension was the product of an ensemble of around 30 musicians. The vision might have been Robinson’s but the sheer scale of the sound achieved required considerable group effort. By comparison Light Falls finds WH scaled back, with Shaw and Robinson joined by three of Godspeed You! Black Emperor (Thierry Amar, Sophie Trudeau, and Timothy Herzog) and a somewhat smaller contribution from Ryley Walker and Cooper Crain on opening track Light Falls: The Mantra.

Wrekmeister might be fewer in personnel terms this time around, but what hasn’t changed is the scope of Robinson’s vision and the emotional response he’s able to conjure. Night Of Your Ascension’s almost spiritual sounds focused on murderous intent and actions, producing something that felt like an opera coupled with a brief glimpse of a snuff movie and over the course of two songs (or movements) it covered a lot of musical ground. Despite a smaller cast of contributors, the ideas behind Light Falls and the sonic nous of the GY!BE alumni mean that it still sounds epic in scope.

Initially, Light Falls seems to address similar topics to its predecessor. Taking influence from Primo Levi’s If This Is A Man, a text written about his year spent in Auschwitz and the way in which people can slowly become conditioned to accept appalling acts of inhumanity. It would appear that Robinson is examining a complex and far reaching facet of human psychology but when these concepts are examined alongside songs that relate to his estrangement from his son, Light Falls shines a beam very directly onto a painful personal issue and leaves no doubt about his feelings on his estrangement from his child.

The first three tracks combine to make a single track. Opening with Light Falls: The Mantra finds the collective in a church reciting words to live and die by. “Stay In, go out, get sick, get well…light falls” is repeated as an organ seethes behind them, hammering home the monotony of life whist boiling down Subterranean Homesick Blues to a depressing truth. Moving from the church and into the doomy depths, The Light Burns Us All hits hard with its simple, but crushing riff, itching strings and febrile bass line. The third part, Light Sick, is initially a more gentle affair, and channels the slightly psychedelic edge of Sabbath’s Planet Caravan (a song about floating through the universe with a lover) before pounding any semblance of elegance into the dirt with a thunderous sludgey riff.

The concepts of light and shade, heavy and gentle seem clearly separated to begin with, but with The Gathering things begin to coalesce and work together. The acoustic guitar, piano and violin that introduce the song are soon wrapped in swathes of distortion, but rather than operating in opposition, it is at this point that these previously separate sounds and styles come together to create a soaring epiphany.

Things begin to turn inward with Where Have You Been My Lovely Son? as Robinson examines his estrangement from his family over a droning violin backdrop. The effect is to create a void where the same questions are asked over and over again with no chance of resolution, and naturally, it’s the most genuinely unsettling and upsetting moment on the album. Even the exhilarating but pained howls of “There is no God!!” that punctuate the metallic scree of Some Were Saved Some Drowned don’t resonate quite as much as this most personal of songs. That said, the out of control tumult that Robinson and his cohorts conjure up as the album nears its end and he bellows “Can you feel your life slipping away” is still bleakly exciting. Once again, this is the sound of Wrekmeister Harmonies reporting back from the edges of existence and experience where, on this evidence, it’s both terrifying and beautiful.