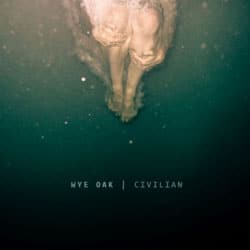 Baltimore duo Wye Oak may just be on the cusp of greater things. Having sown their seed with two LPs to date – the independently released If Children and 2009’s The Knot – Civilian represents an opportunity to reap the rewards.

Happily, it is as sharp an album as you’re likely to hear: singer-guitarist Jenn Wasner and multi-instrumentalist Andy Stack (who plays drums with his right hand and keys with his left, apparently) have outdone themselves this time, taking their blend of indie, folk-rock and shoegaze to near-stratospheric heights.

Civilian is the manifestation of the pair’s long-apparent songwriting aptitude, its ten fully developed, all-enveloping tracks plumbing the emotional depths of abnormality, doomed love and loneliness in their increasingly noteworthy, sophisticated and beguiling fashion.

From the very beginning, one wonders exactly how just two souls are capable of such rich sounds: Two Smalls Deaths, which emerges from the din of some unseen social gathering, trots steadily onwards like The Longcut unplugged, Wasner’s idiosyncratic style lending the air of an intimate confession.

The Alter, a slightly psychedelic harmonic plod, picks up the thread with slow self-assurance – its less-is-more prayer making room for an affirming-yet-understated guitar solo before unfurling into a final flourish – while Holy Holy barges the whole affair into Sonic Youth territory without prior warning, its tough riffs the sound of Wye Oak snapping to attention.

It is the pseudo-staccato of Dogs Eyes, however, that embodies Civilian’s highlight; a bare, skipping jaunt that abruptly disappears in the face of a deep, mangling lead melody, it imprints itself on the listener’s ear, forcing itself as the album’s calling card.

Which is not to say that Wasner and Stack have by this stage shown their entire hand. The title track, which met with all sorts of gushing praise upon its 2010 unveiling, is present in all of its country-blues glory; Plains reads like an updated, moodier take on Snow Patrol‘s Run; Hot As Day extends itself, the band augmenting their formula to arena proportions.

Civilian’s virtues, indeed, continue into its final pairing. We Were Wealth draws together narrative strings into the most patient of crescendos, its gradual-yet-inevitable bloom – in which Wasner channels a serene Florence Welch -reflective of Wye Oak’s trajectory.

Closer Doubt, meanwhile, weighs in as the album’s shortest number. The saddest of the lot, it is a blank canvas on which the pain of loss is painted with guitar and vocal alone; evoking, perhaps, the exquisite heartache of Jeff Buckley‘s Grace.

A boy-girl duo that are emphatically not The Ting Tings, Wye Oak have in Civilian mastered the trade of a range of subgenres – from post-rock to dream pop – and brought them together in an album, journey and experience that captivates from start to finish. Should they call it quits tomorrow, they can rest safe in the knowledge that they have offered up an LP to be reckoned with.