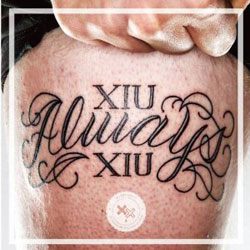 Ten years down the line, Xiu Xiu are somehow still managing to sound like some of the most radical, fresh music-makers around. Their ninth studio album, Always, is a riot; serving up its significant doses of ire, disgust and despair on a plate of pop-savvy, hook-laden electronica that somehow sounds both blithe and engaged, serious and ephemeral.

From the off, Jamie Stewart summons up a sense of inclusivity, of shared experience and pain with the listener. Opening track Hi is a dark synth disco of self-loathing: Stewart issuing the invitation to join his group therapy session (“If you’re wasting your life, say ‘hi’ / If you’re alone tonight, say ‘hi'”, &C.) in a vocal that is tremulous with both fragility and strength. That all this, though, as on the following three terrific tracks that front-load the album (Joey’s Song, Beauty Towne, Honey Suckle) is supported, adorned and propelled by some of the most upbeat, driving electronic music this side of Acid House, is key in preventing Always’ dark moments (of which there are many) overwhelming the listener.

So for each lyric redolent of sadness (Born to Suffer’s “… and with that, all your dreams are gone”), despair (the “plague of darkness” in Beauty Towne), or terror (or “the horror, the horror” as he puts it in Smear the Queen) there is a matching moment of joy to be found in the giddy, wild freedom of the music. Both Born to Suffer and Smear the Queen build to wonderful peaks of euphoria; the former with some brilliant/bonkers synthesised squiggles and wriggles in its last third, the latter with a statelier, more subtle but no less joyous build.

Make no mistake, though, this is serious music that covers – with a directness that is sometimes overwhelming – serious things. I Luv Abortion is a harsh, angry shout of a song, the vocal spoken… exclaimed… shouted out and the electronic effects that back it rendered deliberately ugly and abrasive. The combined effect is part-ludicrous, part-terrifying and furiously compelling. Even more arresting is the album’s closing track, Black Drum Machine. This bleak tale of abuse, dysfunction and death (“Your brother was the first boy inside of you (…) Your father was the first man inside of you”) sees Stewart at first crooning tenderly, sympathetically as the harrowing tale unfolds, before once again unleashing his fury towards the song’s end in all its fearsome glory.