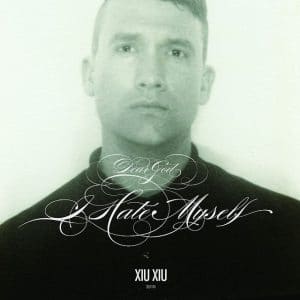 Some people put on the guise of insanity for artistic effect. Others, no matter how hard they try, can’t help but let the brooding, deeply disturbing aspects of their being seep into their art.

After listening to Gray Death, the opening track on Xiu Xiu‘s seventh studio album, it should be apparent to anyone reasonably observant that Jamie Stewart isn’t playing around. He bursts onto the track with a blunt plea – “Beat, beat me to death – I said it” – sounding more like a man calling out for someone to save his life rather than end it. The disparate sections of the song only add to the confused emotions, as what begins as a cutesy plucked melody morphs into a thick, dissonant track of acoustic guitars, timpani, strings, tambourines, and an unyielding amount of fuzz.

The heart of Xiu Xiu (and, for the unintiated’s sake, it’s pronounced ‘shoe-shoe’) is a deeply disturbing honesty brought to light by an intense mixture of sounds and song styles. It’s kind of like experimental emo with balls. As with a good horror flick, Xiu Xiu succeed if the audience is left squirming in their seats. If Gray Death didn’t do it with its raw intensity, just wait until Jamie Stewart tries to look on the brighter side of things with Chocolate Makes You Happy. His ironically lilting quiver whilst singing the titular refrain ends up being even more unsettling than any of his earlier screaming requests for imminent death.

Dear God, I Hate Myself covers a considerable range of sounds. Hyunhye’s Theme opens with a lush orchestral section and transitions into a stark world of acoustic guitar tinged with waves of programming noise. But the title track contains mostly sounds from a Nintendo DS, and other tracks like Apple For A Brain and Secret Motel stress a strictly chiptune aesthetic, favoring synthetic, nostalgic video game-type sounds to more traditional instrumentation. Other surprises come in the second half of the album, such as Cumberland Gap, a banjo-fueled mountain jig that sounds charmingly out of place.

Such a disjointed approach to an album would normally produce very bad results. But somehow Stewart, along with multi-instrumentalists Angela Seo and Ches Smith, have worked with Deerhoof‘s Greg Saunier to produce an utterly intriguing collection of songs. There’s just enough pop influence to catch the audience’s ear along the way – the refrains on Chocolate Makes You Happy, Dear God, I Hate Myself, and This Too Shall Pass Away (For Freddy) are as infectious as any mainstream pop song.

But fans of eclectic and experimental music will find the most here to muse on. Every perfectly reasonable melodic hook is outweighed three to one by totally incongruous noise. But like Deerhoof, the noise does seem to serve an artistic purpose here, even if it’s just to throw the listener off guard before the next catchy part comes around.

After spending some time with Dear God, I Hate Myself, it becomes apparent that this is simply the only way Stewart knows how to make music. What a horrifying, but astonishingly honest and refreshing accomplishment.