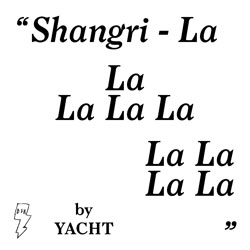 Billed as a “Band, Belief System and Business”, YACHT – principally Jona Bechtolt and Claire L Evans – present themselves in an entertainingly and not altogether seriously cultish manner.  With their live shows and supporting artwork dressed in meaningless/meaningful symbols and ciphers, the music itself has to work hard not to seem a mere adjunct to the overall “YACHT experience”.

The track titles, and indeed many of the themes are, at first glance, appropriately quasi-religious.  The main concern appears to be finding alternate worlds, be they idealised (Utopia, Shangri-La, Paradise Engineering) or hell-like, as with Dystopia (The Earth Is On Fire). Drill a bit deeper into what the band are actually saying, though, and the message is in fact more of an affirmation of life right here on earth. As the title track puts it: “I don’t wanna die and go off to paradise” (requesting “L.A.” as an alternate choice to “heaven”).  Paradise Engineering, too, reads as a rejection of the religion that they are sending up elsewhere: the declamatory spoken-word vocal urging their followers to devote their energies to creating a paradise here on earth; simultaneously offering to become “gods” while admitting that they belong in hell “for breaking all these rules / and singing all these songs”.

It’s not all other-worldly stuff, though.  Human relationships also loom large in these songs.  I Walked Alone is a pulsing, jerky paean to the natural order of things, and the value of friendships. Love In The Dark is a sinister take on obsessive love: “I love you like a smalltown cop / yeah, I wanna smash your face in with a rock”, while Tripped And Fell In Love is a more straightforward love song, despite the protestation “I told myself I’d never write a love song”.

If their message is more cleverly nuanced than it first appears, then, so too the music. With vocal duties mainly taken by Evans, occasionally supported by Bechtolt, many tracks are synth-heavy in an ’80s flecked way that might sound a little obvious initially.  The likes of Human League and Depeche Mode can be traced through tracks like Dystopia (The Earth Is On Fire), Love In The Dark, One Step and Tripped And Fell In Love.  Combined with this is a hugely danceable, often funky, disco feel to many of the tracks (particularly Utopia and Paradise Engineering).  The device of repetition of a key word or phrase is frequently used, as with Dystopia’s “The earth, the earth, the earth…” or Shangri-La’s “wonder, wonder, wonder, wonder where do I fit”. This, coupled with an excellent way with a hooky, insidious, under-your-skin melody or short synth riff (Shangri-La, Love In The Dark, One Step) all contribute to a more enduringly satisfying listen than might be initially expected.

The tracks that stand out most – Dystopia (The Earth Is On Fire), One Step and the rippling, sweet affirmation of life on earth that is the title track Shangri-La – all offer something more than an ironic parody of cults dressed up in electro.  In fact, leaving aside the  slightly below par Holy Roller and Beam Me Up, the same could be said for this whole album.  Working on many levels: entertaining, thought-provoking, musically satisfying and yes, still pretty funny too in parts; YACHT might not be genuinely looking to save your souls, but they certainly have more to offer than most other sects that you might care to join.