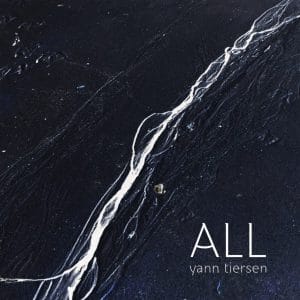 Yann Tiersen has spent the last 15 years on the island Ushant, located in the Celtic Sea between Cornwall and Brittany. It’s there that he built his own studio, The Eskal, in an abandoned discotheque, and it’s perhaps unsurprising that the inspiration for ALL comes predominantly from this environment. But Tiersen hasn’t simply looked out of his window or taken strolls along the coast line for his influences. As the title of the album suggests, he’s looking at the bigger picture, taking time to understand how life on the planet fits together and how it can co-exist and remain or not remain in balance.

Taking field recordings from various locations, Tiersen has created an album that works on a number of levels, and listening to ALL completely devoid of context is a rewarding listen. Those already familiar with his work will know that his compositions have the ability to get under your skin, they work their way into the subconscious and trigger a dizzying array of emotions – from ecstatic joy, through introspective reflection and occasionally, unexpected floods of tears.

Dig a little deeper, however, and the album becomes a far more expansive and thought provoking experience. Utilising field recordings and incorporating them into his music, Tiersen gives these compositions a narrative without the need for vocals. When vocals do make an appearance, provided by guests Anna Von Hausswolff, Ólavur Jakobsen and Emilie Tiersen, they are either wordless motifs or sung in Breton (the language of Brittany).

The album opens with Templehof, named after the former German airport. From Nazi airbase through to public park and festival site to its use as a refugee camp, Templehof is an area whose significance has shifted consistently. The piece opens with the sounds of children playing and develops into a beautiful and heartbreaking piano meditation that is undercut by a slightly menacing bass tone. So much history and significance at one site over the course of a few years is expertly encapsulated, leading to the conclusion that it will continue to change in the future, with or without human interference.

The album seamlessly merges the sounds of nature with Tiersen’s piano, electronics and violins. Koad features the twittering of bird song chattering in unison with a heavenly vocal, as Tiersen switches between delicate piano motifs and forceful, swelling pulses. Erc’h treads a similar path, with strings, feedback and birdsong coming together perfectly. When the vocals come in it is hard not to be reminded of Sigur Ros in their early pomp: it sounds like a hymn to the natural world and possesses the required beauty needed to give praise.

Pell takes the cries of a baby and adds them into a shimmering soundscape. Sounding not unlike Enya at times, this slowly unfurling song can’t help but trigger an emotional response. Windchimes clatter, Tiersen’s electronics carefully replicate animalistic calls, and at the heart of it all is that human sound, made at the most vulnerable time in life.

The album is crammed with references to nature, not just in the field recordings used but in the song titles too. Alongside location names, are Koad (Wood) Prad (Meadow) and Helo (Sun). Usal Road, meanwhile, was written about Tiersen being chased by a mountain lion in 2014 at that location. Prad features bird calls that are every bit as beautiful as the sparse piano that accompanies them. The other theme that appears to run throughout is the transient nature of place, time, and meaning.

Templehof alludes to the constant change of environment, political attitudes, and the ability of people and nature to reclaim, while the Final track Beure Kentañ, which translates as First Morning, perhaps suggests that a new dawn is upon us. With sounds of youth and nature combining over the course of ALL, it’s hard not to think of the recent Climate Change strikes undertaken by the youth of the country. Change is coming and the planet can be healed from the chaos bought about by the human race, but it’s going to take all of us to make it happen.