by Ross Horton
published: 19 May 2014 in Album Reviews
Tweet 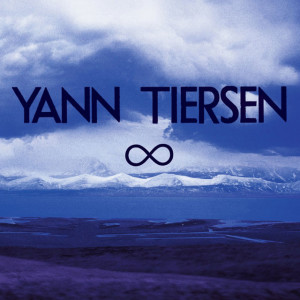 “Best known for the soundtrack to Amelie” will follow Yann Tiersen around forever. And rightly so; what a charming soundtrack it was. Tiersen is now 13 years divorced from that project, which just about sums up the looming spectre of a successful soundtrack over an otherwise relatively-unknown composer.

Work on Infinity started in Iceland, and was followed up by some work in “Ushant Island, Brittany” – where Tiersen hails from. But the Icelandic terrain is obviously infectious: You run out of fingers when trying to count the number of artists who’ve been charmed by the country, and have produced widescreen, epic-scale music informed by its landscape. Mute helmsman Daniel Miller mixed the album, adding an extra anticipatory gloss to an otherwise rather anonymous project.

∞ (or Infinity) opens with the title track, where sinister, looming washes of sound are cut through with scraped violin notes. It’s an interesting choice of opener, owing to the liveliness of some of the other material. The sombre, reflective tone of the piece is supplemented by glistening piano notes and occasional cymbal crashes. The two tracks, on first listen, seem to be intertwined – a pattern that emerges throughout the record.

The barely-there ambiance that opens Midsummer Evening paves the way for the sublime psychedelic dreaminess that grows out of it, expanding in a minimalist fashion before a cymbal crash brings the main melody (and some vocals) into the mix. It’s a wistful, deliberately uplifting number in the vein of an Elbow or an Efterklang.

Ar Maen Bihan introduces some urgency into proceedings: a forceful kinetic energy pulses throughout the insistent rhythm. It seems to constantly be in motion – surely a useful mode one uses when trying to introduce dynamics into a scene of particular note within a movie? The Crossing, which comes later in the record, seems like a reprise of Ar Maen Bihan, such is the similar energy pulsing through the track. The Crossing is the best track on the record, simply because it sounds like a whole host of different bands. It doesn’t seem rooted in a cinematic vibe (although it definitely has one), but rather enchants the listener with a swaying rhythm and a chilly group vocal.

Lights goes one step further – the tempo is increased yet again. This track would be best served with an earlier slot on the record, such is the tidal-wave of bliss Tiersen bestows on your ears. But the gloom returns with the righteously-Nordic track Steinn, featuring some morose spoken vocals in Icelandic and a vaguely industrial bent. The rigid drums and fuzzy guitar sounds are complemented by a bizarre kazoo-sounding synth. Grønjørð, which precedes it, has far more atmospheric qualities that one would usually associate with the territory in which the record was born. A downbeat vocal is framed by a chiming, clicking backdrop and vast sweeps of strings.

The album closes with Meteorites, which features Arab Strap man Aidan Moffat’s dusky vocal uttering yearning poetry. It’s probably the most interesting gambit on the record, and becomes little more than a showcase for how good Tiersen can make other people sound. As such it serves to make you believe that a whole album’s worth of collaborations with recognisable, distinctive artists might well be a better proposition than the record you’ve just listened to.

Ultimately, the album isn’t the record that will help him shed the albatross of “best known for the soundtrack to Amelie”, and it doesn’t give any indication that such a work is incoming. However, if you’re after more evidence of the intoxicating effect of Iceland on foreign composers and artists the world over, this is as good an article as you’re likely to find. Surely satisfying to an unknown (but tiny) demographic, this record is instantly likeable, but it’s also just as immediately forgettable.