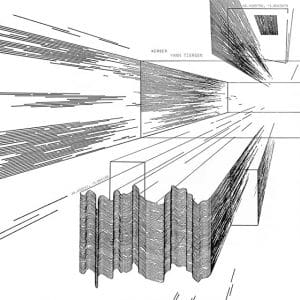 Yann Tiersen has spent the last year and a half in isolation. Nothing remarkable in that, you might think, but his circumstances are slightly different. The multi-instrumentalist continues to live and make his music on the tiny French island of Ushant, positioned off the coast of Brittany at the south-west entrance to the English Channel.

Kerber is his portrait of the island, a suite of seven tracks. It is a piano album but with knobs on, for Tiersen felt ready to bring electronics into his music fully for the first time in a good three decades. Initially he uses them as an ambient blanket enveloping the piano like a thick mist, its cushion a reassuring presence. Then, as the album progresses, the electronics generate considerable kinetic energy, the lighting of a fire that helps bring forth a wealth of musical ideas.

All seven tracks are named in the Breton language. The first, Kerlann, presents the bare bones of Tiersen’s music and feels like the main body of the island itself, with a stately melodic line cloaked in ambience. Gradually Ar Maner Kozh introduces the idea of more movement through a flickering electronic commentary, with sounds like the soft squeezebox of an accordion acting as percussion. Kerdrall drives that momentum to its logical conclusion, and a powerful bell-like motif sounds on the piano as the height of power is reached. When the electronics drop out the piano is left high and dry with a simple but very effective theme.

Although it is a big album, Kerber finds Tiersen at his most instinctive, playing the piano with concentrated feeling but ensuring there is plenty of room as the layers of electronics build up. The album evolves symphonically, with a grasp of structure that could be described as classical but which works with big electronic vistas and increasingly active percussion. Drums are hardly used but often implied, with Ker al Loch a case in point. Here a flowing piano acts like a continuous source of water, its colours and reflections altered by striking modular sounds that flick through the texture with sudden brightness. Although it is not named or implied in the video, Tiersen could be evoking the sudden glare of La Jument, the lighthouse just west of Ushant.

Even in a home environment the listener is made keenly aware of the raw elements brought to life by the music- a near constant wind, the inevitable ebb and flow of the tide and the spray that comes with it, the weather-beaten buildings. The shapes of the buildings are implied in the quieter music, where the sea retreats and the piano or an equivalent lone force comes to the fore.

Kerber is a powerful encounter with nature, a portrait of an area wild and remote but teeming with life. It is a portrait of the best sort of isolation, man at one with nature and drawing inspiration from its power and rugged beauty. Tiersen’s gamble with electronics pays off handsomely, the listener rewarded with a lingering insight into his world. A beautiful hour spent in the company of a fine musical mind.