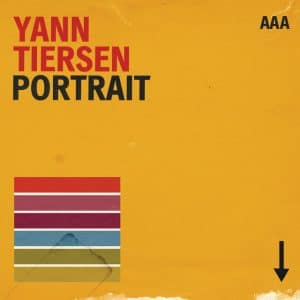 In Yann Tiersen’s own inimitable way, he has with Portrait reimagined the concept of a ‘best of’ album. He has taken on the massive task of reviewing his legacy to date by taking a completely analogue based approach to re-recording 25 songs from across his extensive career, the result of which is a completely engaging and rather brilliant album which serves both as introduction to and compilation of some of the great Breton’s best works.

To assist in this reimagining Tiersen has assembled his live touring regulars Emile Tiersen, Jens L Thompson and Ólavur Jákupsson together with a group of very select contributors, these being Gruff Rhys, John Grant, Blonde Redhead and Stephen O’Malley from Sunn O))). In order to achieve the sound he was aiming for, contributors were invited to Tiersen’s studio to ensure that they were able to offer their contributions to the analogue process that was at the core of the album.

Blonde Redhead’s sent-in contribution to Closer aside, everyone attended Tiersen’s island studio, on Ouessant, off the coast of Brittany, to ensure that the process was followed. This was especially important to Tiersen, as some of the original recordings were completed on DAT recorders, so this marks the first time this process has been followed.

It’s no surprise that O’Malley agreed to be part of it, given that Sunn O))) have released two albums in 2019 which were made following a similar recording process. One of his contributions is on the opening of the album, Introductory Movement, where his guitar adds something rather subtle that nonetheless gives an impression of complexity to come.

The song that perhaps typifies the project most is Rue des Cascades, sung in this instance by Jákupsson. In its original form, on Tiersen’s second album of the same name from 1996, was a pop song sung by Claire Pichet. The version on Portrait starts as a piano piece, but then at four minutes, vocals and surrounding instruments join in. The change from female to male vocals, together with the use of extended instrumentals, create something familiar that nonetheless feels completely different.

As a piece of work documenting a career and a way of making music, Portrait is astonishing. The addition of contributors takes nothing away whatsoever from the music’s complexity or from Tiersen’s genius. At 25 songs, and lasting one hour 37 minutes’ playing time, there was always the potential for it all to feel too long, but it completely arrests; being almost impossible to turn off indicates that the sequencing is as compelling as the music. Anyone interested in music of whatever form, the work of any of the contributors who are present here, film scores, or Tiersen’s early work specifically, will surely find Portrait to be quite the perfect picture.