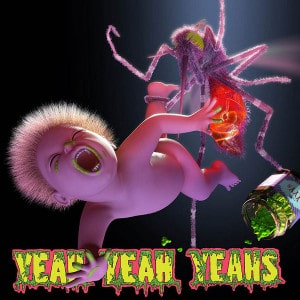 Yeah Yeah Yeahs have long been characterised as a band that favour style over substance, a view that is mainly based on lead singer Karen O – who is, arguably, among the best front women ever. However, while mainstream success has never been forthcoming, they are easily one of the most interesting and consistent alt-rock bands to come out of the early noughties. In fact, the New York trio have only got better and better with every album since the release of their critically-acclaimed debut, Fever To Tell, in 2003.

Now, almost 10 years to the day since the release of that thrilling work, they are back with their fourth LP, entitled Mosquito – and what a return it is. Following their more marketable, disco-inspired third album It’s Blitz! in 2009, Mosquito sees Yeah Yeah Yeahs evolve once again. “We would love for this music to make our fans feel something, for it to stir some shit up inside of them, whatever that may be,” Karen O said of the new record. It is not something Yeah Yeah Yeahs haven’t managed before – Maps, from their debut, remains one of the most beautiful indie songs – but there is certainly more intimacy and emotion invested in Mosquito.

The album opens with the phenomenal first single, Sacrilege. It’s a confident and ambitious track that starts with Karen O’s distorted vocals over Nick Zinner’s sparse guitar riff, before exploding into a magnificent gospel choir-backed conclusion. The history of music suggests it’s best for alternative bands to avoid gospel choirs like the plague, but Yeah Yeah Yeahs pull it off with remarkable ease. Sacrilege is an impressive opener to Yeah Yeah Yeahs’ fourth album, which soon proves to be by far their most eclectic and experimental effort yet. But rather than sounding chaotic and directionless, Mosquito is as accomplished as their previous albums. Subway is a prime example of their ability to subvert expectations, with the constant sound of wheels travelling along a track providing an eerie, but evocative, backing for Karen O’s fragile ode to New York.

Another highlight is Slave, which is one of the most rock-friendly songs on an album where Yeah Yeah Yeahs are, for the most part, quite restrained. Zinner’s gritty riff  and Brian Chase’s rumbling drum beat provide underpin Karen O’s sultry vocal, as she sings, “You keep me, you keep me, your slave”. Then there’s the driving Area 52 – a more typically quirky track from the trio – which includes a squirming riff and lyrics about aliens, while Karen O expresses her fear of mosquitos on the frantic title track.

Yet Mosquito is at its best when Yeah Yeah Yeahs are moody, as is the case on the apparently roots reggae-inspired Under The Earth and in the closing stages of the album. Under The Earth is the most left-field of the tracks on Mosquito, with its rumbling bassline the only constant as swarming synths surround it. The album concludes with the quite brilliant Despair which, despite its title, is actually one of the more uplifting songs, and the mesmerising closer Wedding Song, which rounds off Mosquito poignantly.

There is no doubt that Yeah Yeah Yeahs have matured a lot since their previous album and Mosquito is evidence of a band very comfortable with their craft. It combines such a variety of disparate styles that it really should not work, but Yeah Yeah Yeahs manage to tie everything together seamlessly into what is possibly their most assured and unique record to date. Don’t be surprised if Mosquito is on lists of the best albums of the year by the end of 2013.