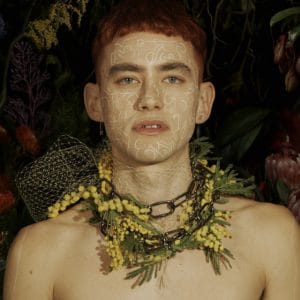 As Pride month comes to an end, London Pride rolls around again, and straight celebrities prepare to pay lip service to a section of their fanbases, it becomes very noticeable how few unabashedly queer musicians there are in the UK pop scene.

Enter Olly Alexander, the lead singer of Years & Years who has gradually become a leading LGBTQI+ activist through his involvement with Stonewall’s No Bystanders campaign and his BBC3 documentary Growing Up Gay. These threads run through Years & Years’ second album Palo Santo, nowhere more so than on opening song Sanctify.

Over a bass-heavy rhythm track, Alexander sings about “a couple of, let’s say, ‘encounters’ with guys who identify as straight but what has happened between us has been somewhat less than straight”. The melody line snakes sensually around an unorthodox chord sequence, and the use of religious imagery invokes interesting ideas around sinfulness and purity. As the lead single it was a bold choice, and shows Alexander embracing his sexuality far more openly than on the singles of 2015’s Communion. Preacher returns to similar subject matter in a more upbeat, cheeky way, with the refrain “He’s a preacher, but he’s preaching a lie/ Come on, preacher, let me teach you tonight”.

The biggest influence on the album is pop music of 10 to 20 years ago, and this recurs in many ways. The backbeat of poppy second single If You’re Over Me is reminiscent of the diwali riddim that dominated the charts in the early 2000s, Karma’s chord sequence brings to mind Lauryn Hill’s 1998 hit Everything Is Everything, and 21 Questions, Promiscuous Boy and Baby It’s You are subtle, even subconscious nods to the music of the band members’ childhoods.

Palo Santo’s production remains rooted in the electropop of Years & Years’ previous work but more R&B influences are present this time round, as heard in Karma’s slick synths and Lucky Escape’s resonant 808 kicks. House also has its part to play on the uptempo Hallelujah and Rendezvous pursues a very contemporary moombahton rhythm. As with any pop album the hooks are key, and there are plenty of explosive, addictive moments here continuing the magic that made King and Shine such massive hits.

All For You is a perfect example, and an album highlight. The track begins with muffled chords and a distant earworm, before Alexander’s verse enters accompanied by a 4×4 kickdrum and the ticking of a drum machine rimshot. The lyrics focus around a relationship that’s coming to a bitter end, and the melody slowly rises as another rhythmic layer is added and the synths grow in intensity. The hook bursts in, alternating between itchy syncopation and straight notes while the melody makes its journey up to a frustrated peak and back down to the tonic. Vocal harmonies underneath add nuance to the titular phrase, the post-hook simplifies these motifs nicely, and it all combines to make a perfect pop moment, songcraft at its finest.

Alexander has spoken in the past about the importance of gay pronouns in songs, and Palo Santo is peppered with them in a way that can still surprise with its novelty. The sounds and textures of their debut album are being developed, pushed, elaborated on, and in a year when artists like Janelle Monáe are shaping the sound of queer music stateside, Years & Years offer a blueprint for UK pop that carries on the lineage of Pet Shop Boys and George Michael but is also forward-thinking and connected to the broader scene. And that really is something to be proud of.