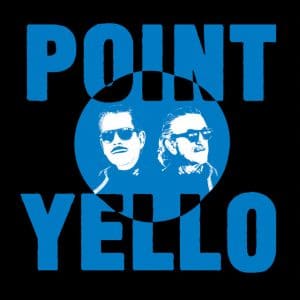 Pop music is supposed to be fun. That was the immediate reaction on listening to Point, the 14th album from Swiss electronic music pioneers Yello. The two – Dieter Meier and Boris Blank – could never be accused of taking themselves too seriously, and it is a pleasure to report nothing has changed.

Previous album Toy hit the spot, but Meier’s voice was criminally underused as Yello broadened their vocal sound. With some of the most distinctive tones in pop music, he returns to the front for this album, and shows throughout Point that he can still create a vivid story in less than 50 words, or even sooner if the listener is on widescreen sound or headphones. That way you get all the nuances of the breathy murmurs, the sidelong musical glances, the deep sighs, the catchy vocal couplets. All are part of the Meier vocabulary, and they get similarly detailed music and backing vocals from Blank in response.

The attention to detail with Yello’s percussion is an element of their production that doesn’t get enough credit, but Point reveals it as a descriptive, scene-setting tool. The style has changed very little, every note having its place, never too many layers, each component complementing the other. In this respect they are like a well-oiled classic car, sleek and cutting a dash but also prone to enjoyable bouts of unpredictability.

Clearly Meier and Blank still love what they do. Tracks like Out Of SIght are an illustration of the pure enjoyment of making music, while The Vanishing Of Peter Strong will create instant smiles of recognition from fans, as Meier talks of “a man… wearing a very strange hat”. The listener hangs on Meier’s every word, while descriptive touches like the enormous reverb to capture the big room add the finishing gloss. Big Boy’s Blues continues the penchant for great character profiles, Meier on his best storytelling form.

Waba Duba is classic Yello, its fun wordplay and parping brass a clear throwback to The Race. It proves every bit as enjoyable as their biggest hit, thanks to the wobbling wordplay, as does the smoking Hot Pan, sizzling with “hot pan” and “popcorn”. Core Shift is excellent too, its furtive movements straight out of a detective series, while Basic Avenue’s note that “everybody’s just a little bit insane” also hits the mark.

Meier’s voice continues to confound the laws of science as it reaches the depths, Way Down showing there appears to be no limit on that front. He takes the lead on all songs save the last one, where previous collaborator FiFi Rong adds breathy vocal to Siren Singing, closing the album on an enchanting reverie.

How inspiring that two fellows of pensionable age can make electronic music with the same enthusiasm they mustered for their first album together 40 years ago. Point is classic Yello, and deserves to be added to any fan’s record collection without delay.

More on Yello
Yello – Point
Yello’s Dieter Meier: “Music is like taking breaths for me, like being in an oxygen tent” – Interview
Yello – Toy