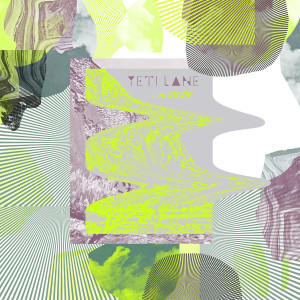 Parisian duo Ben Pleng and Charlie B form the myth-like ape-in-residence of Yeti Lane and have been quietly concocting a dense collage of sounds through traditional instruments and programming since 2009. Named after the Yeti album by sonic heroes Amon Duul and Penny Lane by The Beatles it makes a skewed sort of sense, as elements are taken from both in the creation of their music.

L’Aurore marks the band’s third album excursion after 2012’s lauded The Echo Show. Loop and phase are liberally applied throughout L’Aurore recalling an unholy partnership between the fuzz of Spacemen 3, Mercury Rev’s stargazing and the locked-in rhythms of Kraftwerk that just keep coming to build something epic out of something so seemingly simplistic.

Blasting off into orbit on the suitably epic opener Délicat, replete with swooning strings, funeral drums and spaghetti western psychedelic guitar work, it sounds like it could comfortably be twice its length. Good Words Gone sounds like it was a pretty little song reminiscent of Air before taking a wrong turn down a dark alley in the wrong part of town. Acide Amer’s low-slung throbbing darkness recalls Croydon’s Loop, full of phased vocals and guitars dropping some heavy riffage into the dense musical soup.

Like those other sonic spaceheads Secret Machines, French duo Yeti Lane seem enthralled by the golden age of mind-expanding music (most notably Pink Floyd) in their odysseys into consciousness expansion through wigged-out mysticism, (minus the public school angst). Lyrically Yeti Lane opt for the opaque variety, sent through a haze of effects possibly about wistful romantic possibilities or galactic calamities if they could be unpicked with any clarity.

Things become more detached with the loose sprawl of Liquide as it slides on a bed of shifting sonic plates of overwhelming guitars being tortured in a variety of guises. Crystal Sky comes wreathed in a psychedelic fog, that could be beamed fresh from some San Franciscan bunker with its kaleidoscopic intention to open your inner eye with coruscating guitars and soothing to ecstatic vocals. Exquis allows Yeti Lane to recline during its eight-minute gestation as guitar figures positively go into orbit before crashing down in a blaze of feedback. Closing with their spacious take on Serge Gainsbourg’s Ne Dis Rien (Don’t Say Anything) set against swathes of trickling keyboard and squalling guitar it is the fitting finale to an otherwise stellar album. The only ‘black star’ goes to title track L’Aurore where the quality control dips to a plodding, predictable dirge that seems out of place amidst such solid company.

Guitars in Yeti Lane’s paws are instruments of gleeful space exploration that soar and teeter away from conventional song structures to produce free-floating vehicles to inner wisdom while making a glorious cosmic racket. Compatriots M83 may inhabit a similar terrain, but Yeti Lane are on a darker, less-travelled path. Here they ditch the rafts of programmed electronics so prevalent on The Echo Show to work up songs from scratch, creating something dirtier, more organic and intuitive. L’Aurore marks the realization of where The Echo Show hinted at. There is a marked aversion to any definition, whether through vocals or instrumentation, resulting in a more cohesive set that repays repeated exploration.