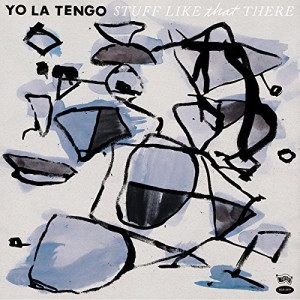 More often than not, bands reaching the 30-year point in their careers have long since settled into a comfortable routine of rehashing old favourites on nostalgic tours that benignly milk the cash cow of their greying audiences. New Jersey’s perennial indie favourites Yo La Tengo celebrated the start of their fourth decade together last year, but unlike many of their contemporaries, the group’s recent work compares very favourably to their late 1990s peak.

2013’s Fade was arguably their best collection since the turn of the millennium, with some delicious orchestral flavours adding a new sheen to their established melodic strengths. With new release Stuff Like That There, Yo La Tengo are celebrating the silver jubilee of 1990’s Fakebook by once again demonstrating their flair for interpreting the works of others, as well as reinventing their own back catalogue.

Fakebook covered an eclectic range of artists from Cat Stevens to The Flamin’ Groovies and Stuff Like That There follows the same wilfully idiosyncratic path. Many listeners will quite understandably be unfamiliar with Darlene McCrae, a former member of ’50s/’60s American girl group The Cookies, but Yo La Tengo’s version of her 1964 song My Heart’s Not In It is a thing of sheer loveliness, with Georgia Hobley’s typically mellow vocal effortlessly bringing out the sadness of the lyrics. With the band’s languid guitar jangle adeptly shifting the tempo from the original’s wall of sound melodrama to a mood of quiet reflection, it’s a fantastic start to the record.

Hank Williams’s I’m So Lonesome I Could Cry follows a similar pattern, with Hobley’s Nico-esque vocals perfectly suited to the song’s contemplative tone and relaxed pace, aided by some beautifully unhurried guitar work from front man Ira Kaplan and the returning Dave Schramm. Long forgotten tunes like The Lovin’ Spoonful’s Butchie’s Song and The Cosmic Rays’ Somebody’s In Love sound like timeless classics in Yo La Tengo’s hands, although their version of The Cure’s Friday I’m In Love sounds just a tad too familiar and contemporary alongside such a treasure trove of unknown gems.

Comparing Yo La Tengo to The Velvet Underground has become a wearily common critical cliché over the years but it is hard not to be drawn again to the similarities when listening to Stuff Like That There. While Kaplan and company have certainly given us their fair share of extended experimental jams a la White Light/White Heat in the past, the simple song structures and wide-eyed romanticism of their latest collection is very much in the spirit of The Velvet Underground’s eponymous third album, which saw Lou Reed take control of the band’s creative direction following the departure of John Cale.

Few artists are capable of scaling the towering heights of a Candy Says or Pale Blue Eyes, yet the original Yo La Tengo compositions here remind us they are also song writers to be reckoned with. All Your Secrets, from 2009’s Popular Songs, is a bucolic, hazy ballad of real beauty and new track Awhileaway, with its steel guitar and a world weary vocal from Kaplan, recalls the vintage work of Lambchop, whose leader Kurt Wagner coincidentally provides sleeve notes for Stuff Like That There. Among his more eccentric ramblings, Wagner sagely opines that “like the nest, the arrival of a new Yo La Tengo record is a wonder of nature indeed” and as their richly productive middle age continues to bear fruit, it’s hard to disagree with him.