You Me At Six – Sinners Never Sleep 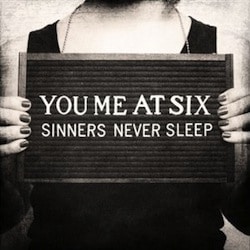 Sinners Never Sleep is Surrey now-not-so-youngsters You Me At Six’s third album, and it shows off a confident mastery of their craft that is both impressive and depressing. It’s a highly polished collection of sometimes infectious commercial pop-punk, but it doesn’t quite do enough to suggest that they can break the trend of other British bands of their ilk and enjoy genuine longevity at the top.

This Is The First Thing is the prime example, ticking all its boxes with slick proficiency. The first chorus pops up in seventeen seconds flat, the glib verbal parallelism (“You were the first one I loved; you were the first love I lost.”) rendering it instantly memorable. Two choruses later (the last one sung twice, naturally) we reach the chest-beating inspirational payoff line (“I’ll never say, never say never again”), and a thousand teenage girls have a new slogan to scrawl on their schoolbags.

There is, however, a conscious effort to move their sound forward, the most obvious aspiration being Fall Out Boy‘s successful confection of confessionalism and state-of-the-union hyperbole. They give it a spirited try on Loverboy, which matches a neat little opening with a nice guitar riff and a semi-falsetto verse, and Jaws On The Floor provides the frantic sing-along, with touches of previous muses Blink 182 still evident. However, they never quite achieve the Chicago foursome’s trick of making the lyricist’s personal problems sound like zeitgeist-defining international dramas, or the genre-pilfering verve of Patrick Stump’s songwriting.

The album dips when they try too hard not to be pop. Adding a screamed verse from Bring Me The Horizon frontman Oli Sykes on Bite My Tongue does little more than add another pretty boy to the credits. It isn’t bold, it’s just a little bromance. Far more enjoyable is The Dilemna, which channels Panic! At The Disco before a monumental brass-based breakdown, with producer Garth Richardson’s work on recent Biffy Clyro records clearly in mind.

It would be genuinely sad if the onset of adulthood robbed You Me At Six of an audience, because they are clearly capable of more. But the signs are ominous. “Too soon to say this the end”, sang a fresh-faced Symposium in 1998, before splitting up without making another album. You Me At Six just about avoid such an obvious jinx, claiming outright “Forget what you believe, cos this is the end” on Little Death. But they’ll have to not just double their work rate, not just grow up, but actually evolve for the prediction to be proven wrong.

You Me At Six MP3s or CDs

You Me At Six on Spotify