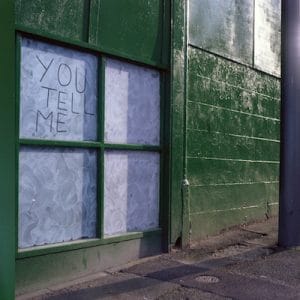 You Tell Me is the name given to the musical project of Sarah Hayes of Admiral Farrow and Peter Brewis of Field Music. They may have met by chance at a concert in Scotland celebrating the music of Kate Bush but the eleven tracks on their eponymous debut album make their coming together sound like a natural, well-planned event.

Most of the tracks were written by Hayes who then sent them to Brewis to try to figure out together how best to record and release. Given Brewis’ expertise at delivering engaging, well-honed musical arrangements on recent Field Music records it proved a wise move (side projects and extracurricular musical activity have always been a part of Brewis’ career to date).

Enough To Notice opens the album, brimming with energy and invention, Brewis’ involvement clear in the multiple layers, surging melodies and all-round musical polish. Get Out Of The Room is more lithe, full of sharp clicks and percussive patterns. Foreign Parts opens with string arrangements that could have came straight from Field Music’s excellent Open Here album and provide a beautiful base for Hayes’ crystal clear, plaintive vocals to soar. It is one of the album’s many highlights and successfully showcases Hayes’ quietly confident songwriting abilities.

Brewis handles vocals on the propulsive Water Cooler, amid all the musical bounces and jerks and flips and inversions. Tracks like Springburn and Jouska see Hayes assert her musical qualities equally strongly. The former glides along, led initially by piano before viola, violin and flute appear on the scene, all flourishing and sparkling. Jouska meanwhile sees the inescapable Kate Bush comparison surface, a finely-poised flight of heart that is all first-person closeness and literary, human warmth.

No Hurry is built around sliding, delicately curled guitar and is followed by Clarion Call which already has a timeless quality to it, depicting a gloriously beautiful sojourn through the English countryside. It is one of many moments on the album that recall the much under-appreciated baroque music of the North Sea Radio Orchestra. Invisible Ink has more of a cutting edge to it, its musical shapes tightly wired into place while Starting Point and Kabuki have a much more lightly-deployed feel to them and draw the album to a close.

It’s a remarkably assured album that shines light on Hayes as an artist of note while further enhancing Brewis’ reputation as an irrepressible source of creativity. It might only be January but this is an album that will bring joy right up to the end of the year and beyond.

You Tell Me MP3s or CDs

You Tell Me on Spotify