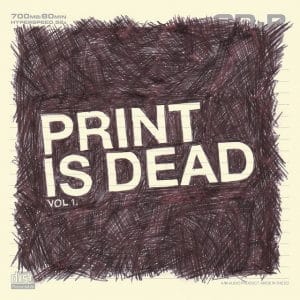 Yourcodenameis:Milo‘s Ignoto album was a sonically ambitious affair to say the least. Roping In Flood as a producer was a master stroke that lent their post-punk songs a distinctive edge. Print Is Dead not only sees the band moving away from the cavernous noise that graced the likes of Rapt. Dept. or I Am Connecting Flight, it also finds them embracing an alternative means of producing songs.

Print Is Dead is a YCNIM album in name only. In reality this is a record of collaborations instigated by an email from the band to several of their contemporaries. Once their partners in crime had agreed to the project they gave themselves a mere 14 hours in which to write and record each song. It is fair to say that the project was chancy to say the least, and yet, for the most part the results are of a consistently high standard.

For years Queens of The Stone Age have been plying a similar trade with their Desert Sessions albums; getting their mates in, taking vast quantities of weapons grade pharmaceuticals and seeing what ends up on the tape. As with those records there are many inspired moments here. There are also a few ill conceived ideas too, but for the most part this is a focused collection of songs.

The album starts of strongly with the wiry new wave Wait A Minute featuring Bloc Party‘s Gordon Moakes. It’s nice line in moody atmospherics and distorted vocal juxtaposed with an understated but danceable drum and bass pattern showing exactly what can happen when two bands who understand each other come together. The Automatic turn up on the wonderfully aggressive The Trapeze Artist, a song that at its centre sounds like a two foot witch being sucked down a plug-hole, and yet is somehow all the better for it.

Sometimes collaborations on this scale can appear to be nothing more than self indulgent back slapping on a grand scale. I Remember The Summer Isles goes a long way to correcting this view. Featuring The Futureheads‘ Ross Millard, Summer Isles is an almost a tender ballad that is drenched in articulate detail and militaristic drum patterns. Importantly it ranks among the strongest material that either The Futureheads or Milo have produced; going a long way to proving the validity of this project for producing great music rather than creating an atmosphere for wallowing in musical self gratification.

We Hope You Are What You Think You Are finds Martin Grech plundering the Melvins back catalogue for a riff that grinds away gleefully whilst accentuating his perfect vocals superbly. Reuben meanwhile pick the pace up on Captain Of Lies, and produce a song that is all angles and clever changes. It’s probably the closest to anything on the album YCNIM would have made themselves; unlike the contributions from Lethal Bizzle and current press darling Get Cape. Wear Cape. Fly. which push the band into areas they would never have explored otherwise. Bizzle’s Ordinary Day grinds in a similar way to Grech’s offering in that it is dark and unrelenting; the band create a suitable backdrop for Bizzle to do his hip hop thing. He recounts the apparently zoo like conditions of living in London at the moment, making it sound more like South Central Los Angeles than we might have expected. It’s an interesting diversion but one that doesn’t quite work.

Get Cape provides the final high point on the album, a perfect amalgam of his programmed beats and acoustic guitar blending with the brooding aggression of YCNIM showing exactly how much you can do in a mere 14 hours. The somewhat directionless Noah, and Deborah Bow let the side down a little, but overall Print Is Dead is a brave and exciting record and idea. This being Vol 1, we can only wait for Vol 2 to provide us with some welcome surprises.