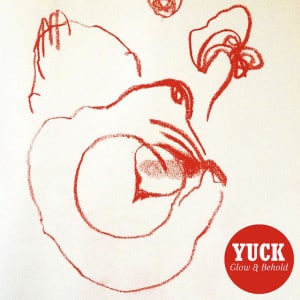 For a band only just nudging their mid-20s, Yuck have been through the ringer and back again. Formed from the ashes of the long-defunct Cajun Dance Party, their debut, eponymous release generated plenty of excitement upon its release back in 2011. Held up as the bright young things of the lo-fi scene, they were likened to Dinosaur Jnr and Yo La Tengo.

That album was virtually flawless; melodic in the right places, but equally fuzzy and murky, with an effortless, slacker feel to it. They toured relentlessly, and things seemed to be going dandy; all eyes and ears were on them, awaiting the second album. And then band member Daniel Blumberg left. The rest of the band decided to continue, which might be pretty normal behaviour if it weren’t for the fact Blumberg was their singer. And their guitarist. And songwriter. And all round frontman.

What followed might happen in any number of offices up and down the land; guitarist Max Bloom got a promotion to frontman (previous experience: singing lead vocals on Operation), while an outside applicant, Ed Hayes, was recruited to add extra guitar (previous experience: barman at east London venue the Macbeth). The result, previewed during a residency last month at said venue, was something of a surprise. Bloom, previously something of a wallflower had, erm, bloomed. Confident and chatty, with occassional vocals from Mariko Doi, there was an energy and buzz that had missing towards the end of Yuck version 1.0.

We left the gig buoyed, expecting big things from Glow And Behold; “…as the crowd files out all thoughts are on its follow-up. Could that much lauded first album end up paling into insignificance in the Yuck discography?” The answer? Not quite. But then, living up to an album like that was always going to be tough.

But they’ve given it a damned good go. Instead of regurgitating their first LP, they’ve aimed higher. Glow And Behold has a bigger sound; they’ve broken free of their bedrooms, opting for something that at times verges on dream-pop. Rebirth and Somewhere, in particular, are blissed out, spacey affairs – a long way from the irresistible earworms of Georgia and The Wall. Lose My Breath echoes the rifts of Get Away, but with a softer fuddled sound, it never quite reaches where it wants to go, while the brass-infused, triumphant How Does It Feel and title track Glow And Behold could have been The Great Escape-era Blur B-sides.

There are some signs of them moving on in a more inspired direction too. Nothing New recalls early Ash and sees them more comfortable exposing their lead singer’s vocals than they have been before. Similarly, Middle Sea is gorgeous, life affirming stuff that’s one of the best things Yuck have ever done; Bloom’s vocals have a pleading urgency that Blumberg’s droning delivery could never have reached.

Glow And Behold has its ups and downs and isn’t quite the coherent, self assured package that its predecessor was; instead it’s the sound of a band reconfiguring, trying to work out which way to go and what to do next. But to have carved a handful of gems at this stage of their career is commendable.