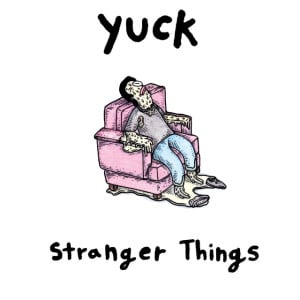 Yuck have handled the departure of their frontman better than many would ever have predicted back in 2013, when it was announced that Daniel Blumberg would be leaving to “focus on other things”. That was just two years after the four piece released their critically-acclaimed self-titled début, which was full of fuzzy, shoegaze pop tunes that inspired comparisons with Dinosaur Jr. and Sonic Youth, among others.

Despite the remaining band members sounding remarkably optimistic about continuing on without Blumberg, it seemed highly unlikely – going on past examples – that a new incarnation of Yuck would be able to replicate the band’s early success. Yet with Max Bloom promoted to frontman and new guitarist Edward Hayes also in place, Yuck returned with second LP Glow & Behold later that same year.

While not quite reaching the same heights as its predecessor, Glow & Behold largely managed to replicate the same fuzzy formula that had made Yuck’s début so engrossing, albeit with less of the unbridled energy. It was certainly better than many expected and suggested that Yuck did have a future under the leadership of Bloom. They just needed more time to work out exactly what direction they wanted to go in.

Almost three years on from the release of Glow & Behold, Yuck are back with third effort Stranger Things, which takes the ideas of the band’s second album and runs with them. Under Bloom’s stewardship, Yuck’s sound became far more polished and clean cut and that particular evolution continues here, with Stranger Things focused on melody rather than mayhem.

That said, there are brief moments where Yuck capture the energy of Get Away from their début, especially in the opening stages. Single Hold Me Closer kicks off with a heavily distorted, chunky riff, as Bloom yells: “Hold me closer to the sun/ lay me down on everyone.” It has clear echoes of early Yuck, as does Cannonball, the closest Bloom has got to emulating Blumberg’s frantic compositions.

However, the first two tracks are misleading when it comes to the rest of Stranger Things. Starting with Like A Moth, which is a slow, dreamy number with a very basic melody, Bloom begins to stamp his authority on Yuck. I’m Okay is another example of the band restraining their sound as the gentle hook at the heart of the song provides the perfect backing for the frontman to address the band’s anxieties over the last few years.

Then there’s the title track, undoubtedly the centrepiece of the record. It possesses the sweetest of melodies, which contrasts beautifully with Bloom repeatedly singing “I hate myself”, as the song translates into one of Yuck’s most infectious choruses to date. There is a clarity to the execution of the track that is repeated on As I Walk Away, where bassist Mariko Doi lends her heavenly vocals to the delightfully restrained hook.

For all of Stranger Things’ plus points – and there are many – it does occasionally get drawn into a sort of purgatory between the old and the new Yuck. Tracks like Down and Swirling have neither the urgency of the band in their earlier days or the gentle, irresistible melodies of their latter approach. Yet just when the album appears to be losing momentum, they come up with a curveball like the biting, gritty closer Yr Face.

Ultimately, Stranger Things sounds more like a band that are more comfortable with what they are doing. The decision to record in the same room where Yuck’s début was created – at the home of Bloom’s parents – appears to have been a fruitful one and has resulted in an album that feels like a fresh chapter for the band. There is also the lingering sense that there is much more to come, which can only be a good thing.