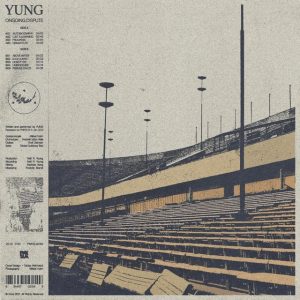 Ongoing Dispute appears an odd choice for the title of this second Yung record, as a quick listen to the lyrics on first track Autobiography reveals that the other party in the argument seems to have moved on with their life. As front man Mikkel Holm Silkjær begrudgingly divulges, his peeved vocal delivery recalling the once endearing sloppiness of The Replacements’ Paul Westerberg, his former loved one has “found a substitute” and “thrown a friendship away”. It’s apparent that, reluctant to move forward and calling out into the void, he’s put himself at risk of drowning in self-pity, reminiscing about a future that didn’t quite play out as expected.

Draped in slate grey atmospherics and demonstratively contemptuous choruses, that air of unresponsive anxiety and regret permeates the record, as the band, grieved and unwaveringly aware they may have left it too late to change events, grapple with what it is they’re trying to convey. In its quieter moments, the record recalls the melancholy whimsy of groups such as The Decemberists whilst at its noisiest points, it draws comparison with verbose provocateurs like AC Acoustics and Idlewild. On the defiantly buoyant Lust And Learning, they channel the anthemic intellect of ’80s indie golden cows Joy Division and The Smiths, as jangling guitars strengthen Silkjær’s lyrical assessments of regional ennui.

The standout songs on the album are the pummelling and assertive Above Water and the idling Progress in which the protagonist stands dismayed amidst the ruins of his existence, looked over by ominous figures, as corrosive guitars and freight train drums shunt him out of syrupy reverie. Progress has him pronouncing, “I shouldn’t settle for anything less than long term success, but it’s hard every time I’m taking a step it feels I’m dragging my feet”. Cemented in, his band mates rally round to get him going once more. Elsewhere on Friends On Ice, which closes the record, Silkjær is aware that “everyone is moving on,” and that it’s probably time he did too.

Had they been performed by any other band, these regularly mawkish and sorrowful lyrics could have tipped the album over into an joyless torrent of petulant whining but the Danish rockers’ mish mash of catchy hooks and reflective self-awareness skilfully instil just the right amount of vitality so as to prevent that outcome from happening. Reminding oneself of the specific moment that formerly sentimental connections came undone is a painful practice for anyone to go through, but by doing so, this specific conflict appears to have found its logical resolution, even if it isn’t the closure all parties involved had initially wanted.