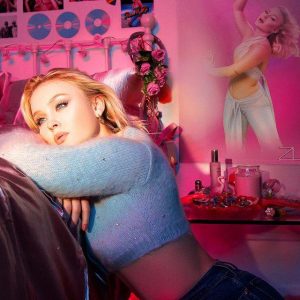 With her 2017 album So Good, Sweden’s Zara Larsson epitomised pure pop: collaborations with the biggest names in the industry, production that veered from the lovelorn ballad to the sunny party anthem, and a formidable voice to sell it. Flash-forward four years and Poster Girl is released in a different environment. It’s certainly more disco-influenced (thank Dua Lipa for that) but the whole aesthetic is also more experimental and multi-layered.

Love Me Land kicks the record off with sampled strings and a very catchy Fade-style groove, over which Zara switches rapidly from impassioned belt to a knotty, syncopated flow. It’s an evocative opener, although like many modern pop songs it makes do with two verses, a slightly meagre portion for a song with this kind of potential. Elsewhere Right Here serves up an infectious groove and lyrics about smartphone obsession courtesy of Julia Michaels and Justin Tranter (“I’m right here, why can’t you look at me / you keep your eyes on the screen like you don’t care”).

So far so good, but this experimental approach also leads to duds. Look What You’ve Done’s melodies don’t sound like they were written for Steve Mac’s labyrinthine chord sequence, while I Need Love’s over-processed vocal harmonies aim for the dystopian but are ultimately a bit painful to listen to. Ruin My Life, the lead single first released in 2018, finds an interesting sweet spot in having a breathless, frantic hook but also being vaguely anthemic in nature. FFF (“falling for a friend”) is also very enjoyable, mixing stylish chords and lyrics that almost seem defiantly vapid – “criticise this for being silly or girly, I double dare you”.

Poster Girl, although far from perfect, is an encouraging sign from Larsson, indicating her adventurous spirit and perhaps paving the way for future triumphs.