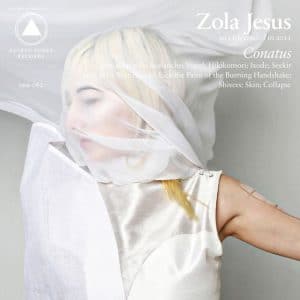 Following an album as wonderfully realised as Stridulum II would, for many artists, be something of a daunting challenge. Such concerns don’t appear to have phased Nika Roza Danilova, or her alter-ego Zola Jesus one bit. On first impressions it would appear that her state of mind is writ large in the title of this album; conatus being latin for endeavour and a philosophical concept which alludes to the innate need for a being to exist and improve.

Intriguingly it was Danilova’s intention to make a big sounding pop album, a considerable departure from her previous work. However, as writing progressed, she found that the music she was creating was expressing itself as something more introspective. It is not entirely surprising that such contemplation informs Zola Jesus’ music. Being raised in harsh Wisconsin surroundings and with few connections to the rush of city life or friends of her own age there was probably a lot of time for reflection.

The instrumental soundscape of Swords introduces the album in a haunting manner, but its glitch aria fades almost as soon as it starts and doesn’t create too much of an impression. From that point on however, Conatus is exemplary. Vessel, a creeping ballad that could be a distant cousin of Massive Attack’s Unfinished Sympathy initially consists of little more than an insistent beat and occasional mournful piano interjections. Eventually creaking percussion and swelling synths add featherlight detail as Danilova pours her heart out in that striking voice that simply bears no comparison.

Hikikomori (a Japanese word used to describe reclusive people) starts life as a stripped back synth track before evolving into a lush, string-infused hymn, filling the glacial wilderness with positivity. It’s the sonic equivalent of watching blades of grass starting to push through gradually retreating snow.

Despite stepping away from the notion of making a pop album In Your Nature hints at where Conatus might have headed had Danilova’s tendency to write songs that inhabit the darker end of the spectrum not come to the fore. She might not be able to break away from old habits as the title suggests, but the skipping drum pattern, stirring melody and a stunning vocal point towards a Zola Jesus for whom a huge pop album is within touching distance.

Seekir too hints at a new direction. Like Björk’s early work on Début there’s a debt to simplistic electronica and simple drum patterns. The tribal, almost spiritual feel created by a sea of chanting vocals pushes the song into new avenues, making it one of the most memorable moments on the album.

For all the intriguing soundscapes that populate Conatus, as usual it’s Danilova’s vocals that are its most enchanting aspect. Her voice is so unique and haunting that it is instantly recognisable. So impassioned is her delivery that there are many high points on the album, but she saves her finest performances for the closing moments. Skin, is a spellbinding, spectral ballad which finds Danilova accompanied by a hushed choir of backing vocals and a plaintive piano. Basic it may be, but it’s impossible not to become embroiled in the emotional maelstrom conjured. With an electronic hum in the piano’s place, Collapse closes the album. Perhaps more emotionally charged that Skin, it’s almost too much to bear to hear Danilova utter the words “it hurts me”, seemingly on the verge of breaking down.

There’s no doubting that Conatus is a big step forward for Zola Jesus. More bare structurally, musically and emotionally than its predecessor, yet by the same token, fuller and more alive, it is an amazing work that showcases a phenomenal talent and a unique voice.